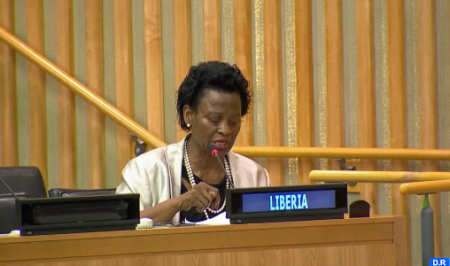 Liberia reaffirmed in New York its “unwavering support” for the Moroccan autonomy plan as a compromise solution to the Sahara issue. Speaking at the annual meeting of the UN C-24, the Chargé d’Affaires at the Mission of Liberia to the UN, Cecilia McGill stressed that the autonomy plan is “consistent with international law, the Charter and resolutions of the Security Council and the UN General Assembly.” “Liberia recalls in this regard the efforts of the Security Council in its successive resolutions since 2007, including Resolution 2602, which again welcomed the serious and credible efforts of the Kingdom of Morocco, namely the autonomy plan, to resolve this regional dispute,” she said. She noted that the autonomy plan enjoys growing international support from European countries (Germany, Spain and the Netherlands), Africa and America and the Caribbean, among others. Liberia, added the diplomat, supports the round-table process with the participation of Algeria, Mauritania, Morocco and the “polisario”, in accordance with the resolutions of the Security Council, including the 2602 of October 29, 2021. “This resolution underlines the request of the UN Security Council to the four participants to remain committed, to show realism and spirit of compromise throughout the political process so that it succeeds,” said McGill, who also welcomed the appointment of Staffan de Mistura as the new Personal Envoy of the UN SG for the Sahara, as well as the regional tour he made last January. In addition, Liberia welcomed the holding, on September 8, 2021, of general elections – legislative, communal and regional – “free, fair, transparent and credible in Morocco, including in the Moroccan Sahara.” She further noted that “the participation rate of more than 66% of voters to elect their representatives further demonstrates their confidence in the autonomy plan,” taking the opportunity to highlight the dynamics of socio-economic development in the Southern Provinces, including the Moroccan Sahara. While welcoming the presence of 26 consulates general in Dakhla and Laayoune, which is a “proof of confidence in the autonomy plan,” the diplomat said her country encourages all peace-loving states to take similar steps. “Liberia further welcomes Morocco’s full compliance with the ceasefire in the Moroccan Sahara, and takes this opportunity to call unequivocally on all parties to return to the comprehensive ceasefire agreement, because the security and stability of the entire region are at stake,” she said. The diplomat also expressed “deep concern about the situation of the people in the Tindouf camps, especially women and children,” while denouncing “violations of their fundamental rights. In this context, Liberia stressed the need to conduct a census of refugees in the Tindouf camps, in accordance with international humanitarian law, the UNHCR mandate and relevant Security Council resolutions.