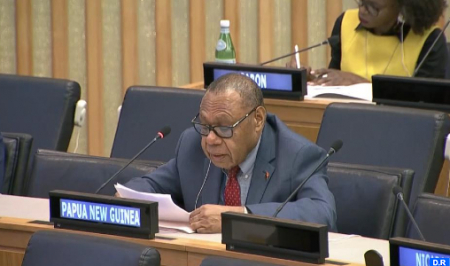 Papua New Guinea has highlighted, before the UN Committee of 24 (C24), the growing international support for the autonomy plan presented by Morocco to close the regional dispute over the Sahara. “It is indeed pleasing to note the growing international support for this credible compromise proposal and we are encouraged by such support which will help all stakeholders involved in this dispute to find a lasting and peaceful solution” to this regional conflict, said Permanent Representative of Papua New Guinea, Max Hufanen Rai, at the annual meeting of the C24 in New York. For Papua New Guinea, an inclusive dialogue at all levels for all stakeholders is an “important tool” to foster mutual understanding and build bridges towards a political settlement of this important issue for the benefit of all parties involved, he said. This solution, he insisted, should be based on practical realities, a spirit of good faith and compromise as stipulated by the “commendable” autonomy plan presented by Morocco and in accordance with the UN Charter, the 18 Security Council resolutions adopted since 2007 as well as the relevant UN General Assembly resolutions. The diplomat also expressed his country’s “full support” for the political process conducted under the aegis of the UN SG to achieve a mutually acceptable, negotiated and lasting political solution, while calling for further encouragement of the current important momentum. In this context, he welcomed the appointment of Staffan de Mistura as Personal Envoy of the UN SG for the Sahara, as well as his “proactive” approach illustrated by his first tour in the region last January. In line with this constructive spirit, Papua New Guinea said it encourages and backs his efforts to resume the roundtable process and capitalize on the “good work” of his predecessor involving the main stakeholders: Morocco, Algeria, Mauritania and the “polisario” under the existing meeting format and in accordance with Security Council resolution 2602.