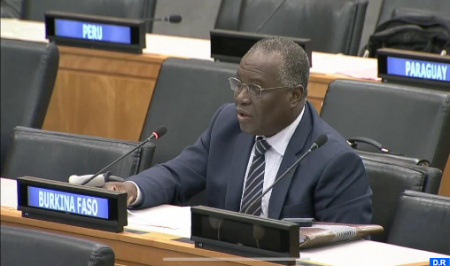 Burkina Faso has reaffirmed, before the UN C-24, its support for the autonomy plan presented by Morocco to close the regional dispute over the Sahara, while welcoming the “serious” and “credible” efforts of the Kingdom to resolve this issue. Speaking at the C-24 annual meeting in New York, Burkina Faso’s Ambassador to the UN, Seydou Sinka, stressed that his country supports the ongoing political process, conducted under the exclusive auspices of the UN Secretary General, to achieve a realistic, sustainable and compromise-based political solution to this regional dispute, as recommended by the 18 resolutions of the Security Council since 2007. In this regard, he welcomed the first tour in the region that the UN SG’s Personal Envoy for the Sahara, Staffan de Mistura, made last January. Highlighting the significant progress made during the two round tables held in Geneva between Algeria, Morocco, Mauritania and the “polisario”, Burkinabe diplomat expressed his country’s support for De Mistura’s efforts to resume this process in accordance with Security Council Resolution 2602. In the same context, Burkina Faso welcomed the Security Council’s request to the four participants to remain committed throughout the process so that it can succeed, expressing its conviction that the United Nations “must continue to play a decisive role in the resolution of this issue.” The ambassador also noted that reaching a political solution to this long-standing dispute and enhanced cooperation between the member states of the Arab Maghreb Union, “would undoubtedly contribute to stability and security in the Sahel region.” In addition, he called on all parties to respect the ceasefire “so as not to undermine the efforts of the UN Secretary General in order to achieve a political solution to the issue.”