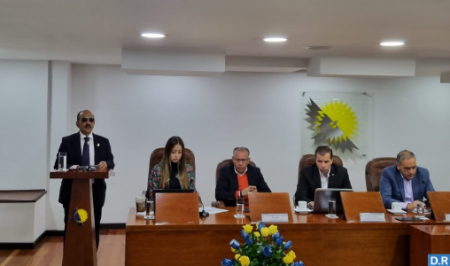 The organization by Morocco of the next session of the Andean Parliament next July reflects the firm commitment of the Moroccan Parliament to further consolidate the partnership and cooperation with this regional legislative institution, said Saturday in Bogotá, Ahmed Lakhrif, member of the House of Advisors. In a speech to the General Assembly of the Andean Parliament, Lakhrif stressed that the organization by Morocco of the next session of the Parliament of the Andean Community is part of the strategic choice of the Kingdom to support unions and projects of integration and regional solidarity, especially in the South, given their essential role in establishing dialogue, cooperation, solidarity and exchange of experiences and best practices, a choice led by HM King Mohammed VI. The Moroccan MP said that the upcoming visit of members of the Andean Parliament in early July will be an opportunity for parliamentarians in the region to learn about what Morocco has achieved on the path of democratization and economic and social growth, which has given Morocco a leadership status in its regional environment. The bilateral visits made by members of the Andean Parliament in the Kingdom have contributed to the consolidation and strengthening of ties of friendship and brotherhood with the Moroccan people, he added, expressing the satisfaction of speaker of the House of Advisors, Naama Mayara with the level of these ties and the achievements accumulated both bilaterally and multilaterally, since the accession of the Moroccan Parliament, as a permanent observer member and advanced partner, to this regional parliamentary body in 2018. Lakhrif also stressed that this visit will also be an opportunity to explore opportunities for cooperation and discuss ways to strengthen human ties and the real roles of parliamentary diplomacy in building a model of South-South cooperation and promote dialogue and cooperation between countries in Africa, the Arab world, Latin America and the Caribbean, so as to ensure security, stability and a decent life for the peoples of these regions.