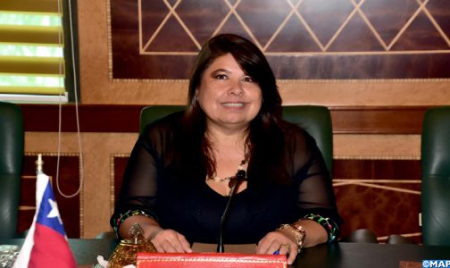 Claudia Nathalie Jimenez Mix, Vice President of the Chamber of Deputies of the Republic of Chile, welcomed, Monday in Rabat, Morocco’s efforts to find a final political solution to the artificial dispute over the Moroccan Sahara issue. During a meeting with the first vice-president of the House of Advisors, Mohamed Hanine, Jimenez Mix highlighted the efforts made at the bilateral level to strengthen the relationship between the two countries and the two parliamentary institutions, a statement from the House of Advisors said. The Chilean MP, who is heading a large parliamentary delegation on a working visit to the Kingdom, gave an overview of the political situation in her country, marked by efforts to achieve several important political and constitutional reforms. For his part, Hanine expressed the appreciation of the House of Advisors for Chile’s unwavering support for the territorial integrity of the Kingdom. He praised the initiatives of the Chilean Parliament, especially the 2020 initiative in support of Morocco’s efforts to secure the passage of El Guerguerat. He also welcomed Chile’s support for the 2018 initiative supporting Morocco’s position and stressing the importance of the autonomy plan presented by the Kingdom as a realistic solution to the artificial dispute over the Moroccanness of the southern provinces. Hanine also gave an overview of the House of Advisors, its unique constitutional position, and its powers and missions. He welcomed the distinguished relations of friendship and cooperation between Morocco and Chile, stressing that these relations derive their strength from common historical and civilizational ties. Hanine also voiced the readiness of the Upper House to play its role within the framework of parliamentary diplomacy, to support bilateral relations “with all the care and interest needed to bring them to the level of common aspirations.” The firm commitment of the House of Advisors to consolidate Moroccan-Chilean relations emanates from the strategic guidelines of the Kingdom based on the growing interest in South-South relations, and is in accordance with the directives of HM King Mohammed VI, he added. During this meeting, the two sides reviewed the various aspects of bilateral relations and ways to develop and strengthen them to serve the common interests of both countries. The meeting was also an opportunity to highlight the political, constitutional and legal reforms undertaken by Morocco to empower Moroccan women at the political and economic levels and to ensure women’s access to positions of responsibility at the parliamentary and governmental levels, as well as at the level of local authorities and public institutions.