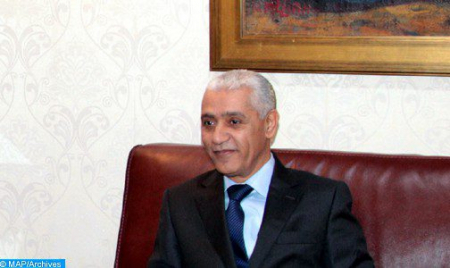 House of Representatives Speaker Rachid Talbi El Alami held talks, Monday in Rabat, with the Ambassador of the Republic of El Salvador to Morocco, Ignacio de Cossío Pérez de Mendoza. The two sides affirmed the strength of the parliamentary relations between Morocco and El Salvador at the bilateral and multilateral levels, namely through the exchange of visits and the holding of parliamentary meetings in regional and international parliamentary fora, said a statement from the Lower House. On this occasion, the Salvadorian Ambassador handed to the Speaker of the lower house a letter from his counterpart in the Legislative Assembly of El Salvador, Ernesto Alfredo Castro Aldana, in which the latter expressed his will to sign a new cooperation agreement and an institutional twinning with the House of Representatives. The Salvadorian diplomat also invited the Speaker of the House of Representatives to visit the Legislative Assembly of El Salvador at his earliest convenience, according to the same source. For his part, Talbi El Alami expressed his appreciation and pride for the letter he received, which gives a new impetus to the existing institutional dialogue between the two sides and adds a further dimension to the South-South parliamentary cooperation. In this respect, the Speaker of the House stressed the necessity to translate this initiative into reality, especially through the preparation of a new proposal for partnership and twinning between the two legislative institutions, the statement concluded.