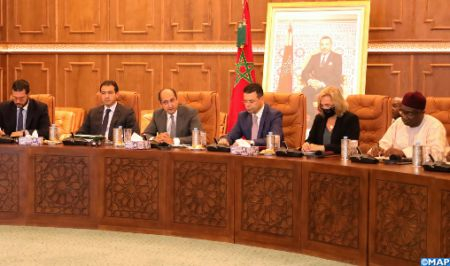 Morocco’s migration governance is shaped by a “humanistic logic”, but is unfortunately perverted by the criminal actions of trafficking networks, said Sunday in Rabat, the Wali Director of Migration and Border Surveillance at the Ministry of Interior, Khalid Zerouali. “The Kingdom’s vision of the migration issue has a passionate sensitivity as its stakes, beyond mobility, incorporate a core paradigm focused on the human being in the sanctity of his fundamental rights, ” said Zerouali at a meeting on migration that brought together officials from the Ministry of Foreign Affairs, African Cooperation and Moroccans abroad, the Ministry of Interior as well as ambassadors and representatives of the African diplomatic corps accredited in Morocco. This “humanistic” logic frames today’s migration governance in Morocco under the National Strategy for Immigration and Asylum initiated in 2013 and which has enshrined the inclusive and supportive approach in line with the Kingdom’s African vacation. Unfortunately, Zerouali deplored, “this noble and virtuous dimension of migration is perverted by the criminal actions of trafficking networks, which exploit the vulnerability of victims and push them into dangerous and deadly adventures.” These networks use strategies of great violence, particularly during planned attacks, “with militia-like and ex-military attackers from countries destabilized by war and conflict.” The National Strategy for Immigration and Asylum is an unprecedented initiative at the regional level, he said, highlighting two powerful actions that have consolidated the continental dimension of migration, namely the African Migration Observatory and the African Agenda for Migration. Under the National Strategy for Immigration and Asylum, more than 50,000 nationals of African countries and friends have been regularized and have seen their administrative situation stabilized, Zerouali recalled. He noted that the regularized people have also benefited from a national integration plan allowing them full access to social, educational, medical and economic services, just like nationals. The humanistic dimension of migration management in Morocco is also reflected in the voluntary returns offered to migrants who wish to return to their countries of origin. Since 2018, more than 8,100 African nationals have benefited from these voluntary returns organized and funded by the Ministry of Interior both by air and land, the official said, adding that with the IOM, the voluntary return program is working well as it allowed the return of 2,400 people in 2021 and more than 1,100 in 2020. In 2020, Morocco adopted a reference framework of standard procedures for the guidance and care of migrants rescued at sea or apprehended at the borders, he added. The official described the events that took place in Nador on Friday as “a real tragedy that we deplore.” The Moroccan authorities are conducting a merciless fight against these trafficking networks with over 1,300 networks dismantled in the last five years (256 in 2021 and 100 until May 2022), he explained. According to Zerouali, over 145 attacks have been repelled around Sebta and Mellilia since 2016 (50 in 2021 and 12 until May 2022). Several members of law enforcement forces, which always acted with professionalism and in full compliance with the laws and regulations, were injured during these assaults, he said. More than 360,000 irregular emigration attempts have been aborted since 2017 (63,000 in 2021 and 26,000 until May 2022), he stated. Zerouali also noted that the regional environment, the post-Covid context, the war in Ukraine and the looming food crisis exacerbate the migration challenge, which requires concrete actions in terms of active solidarity and plural support. Morocco is also ready to cooperate fully with its African friends and brothers through the exchange of expertise and cross-training, he stressed. “The countries of the North must focus on a balanced approach that should not be security-driven, but rather based on structural solutions for the sustainable development of the countries of origin and on fostering legal mobility between the two shores,” Zerouali concluded.