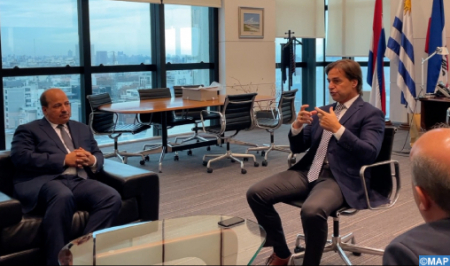 The Speaker of the House of Advisors (upper house), Enaam Mayara, was received, Monday in Montevideo, by the President of Uruguay, Luis Lacalle Pou. During this audience, which took place at the headquarters of the Presidency of Uruguay, Mr. Lacalle Pou expressed his great consideration for the Kingdom of Morocco, under the enlightened leadership of HM King Mohammed VI, stressing the geostrategic location enjoyed by Morocco in its regional and continental environment. The Uruguayan President also expressed his country’s strong will to overcome all the obstacles that are hampering the development of the historical relations between the two countries, adding that all the conditions are met today to promote economic cooperation in various fields and further develop bilateral trade. For his part, the upper house speaker said that this visit opens a new page in the parliamentary relations between the two countries, adding that the diversified composition of the House of Advisors allows it to highlight the great investment opportunities offered by the geopolitical situation of Morocco, as well as its natural resources and its pioneering experiences in order to promote political and economic relations between the Kingdom and Uruguay. “I had the honor of being received by the President of Uruguay with whom we discussed the means of strengthening bilateral relations, both at the political and economic levels”, Mr Mayara told the Moroccan news channel M24 at the end of this audience, noting that parliamentary cooperation will be relaunched with the creation of two friendship groups. Regarding economic and cultural relations, it was decided to implement an action plan to consolidate them, which will certainly have a positive impact on the major issues defended by Moroccans. During this working visit to Uruguay, which will run through June 29, Mr. Mayara will hold several meetings with government officials, MPs and businessmen to discuss the ways to strengthen cooperation between Uruguay and Morocco at all levels.