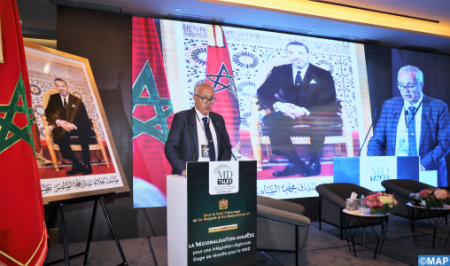 “Advanced Regionalization: For a Regional Integration to Ensure Success of the NMD” is the theme of a conference that began, Tuesday in Rabat, at the initiative of media outlet “Maroc Diplomatique” in collaboration with the Konrad Adenauer Stiftung Morocco. Placed under the High Patronage of HM King Mohammed VI, this conference is part of the 2022 edition of “MD Talks”, a cycle of conferences of African and international strategic thinking. This meeting, which will be attended by government officials from several departments, academics and experts, will focus on the challenges of advanced regionalization in Morocco and ways to accelerate the implementation of this strategic project. By launching the extensive Advanced Regionalization project on new foundations in January 2010, His Majesty King Mohammed VI had set for it major objectives such as institutional harmony, shared development, citizenship, democracy and territorial balance, Hassan Alaoui, President of Maroc Diplomatique sait at the opening of this meeting. “This is the ideal solution for the growth and development of our Saharan provinces. It is the lever for the political resolution of the Sahara dispute,” he said, recalling that in November 2011, the Sovereign declared, on the occasion of the 36th anniversary of the Green March, that “the Moroccan Sahara will be a model for advanced regionalization, implying a democratic election of its instances and a large transfer of powers and resources from the center to the regions, and providing bodies for regional and national solidarity, social upgrading and human development.” The program of this conference includes interventions on “the role of financial jurisdictions in strengthening the principles and values of good governance: What impact on advanced regionalization”; “Advanced regionalization: The southern provinces as a model” and “Regionalization in the face of decentralization and deconcentration”.