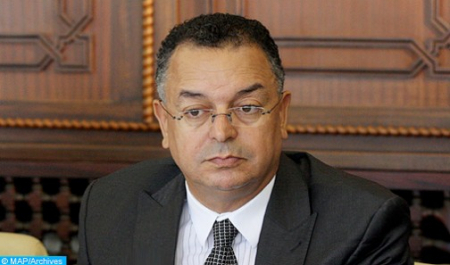 Morocco has been a formidable bulwark against illegal migration flows towards Europe, underlined Moroccan MPs, members of the Morocco-EU Joint Parliamentary Committee. The kingdom uses its own resources to guard its own borders and collaborate with Europe and Africa to better manage migratory floods, said the MPs in a letter sent on their behalf by Lahcen Haddad, co-chairman of the Morocco-EU Joint Parliamentary Committee, to their counterparts in the European Parliament about the assault on June 24, 2022 against the fence separating the cities of Nador and Melilla. He noted, in this regard, that Moroccan forces look outwards towards sea and land to prevent illegal entries into the country and inwards to prevent illegal crossings to Europe. As such, Morocco spends half a billion euros a year fighting illegal migration to Europe; EU aid to Morocco in this regard does not go beyond a total of 270 million euros for a total period of 15 years, averaging a mere 15 million a year, he recalled, stressing that Fighting illegal migration requires resources and real partnership. For the moment, Morocco uses its own resources to guard 3500 kilometers of sea and 3400 kilometers of land borders, Haddad insisted, adding that the challenge is daunting, but the success stories are there: 1300 networks dismantled over the last 5 years only (256 in 2021 and 100 until May 2022). Likewise, more than 360,000 illegal migration attempts have been thwarted since 2017 (63,000 in 2021 and 26,000 until May 2022), he underlined, noting that these stark successes should not be tarnished by tragic events like the recent violent assault on Nador and Melilla. Haddad also stressed that Morocco is not only a land of passage for sub-Saharan migrants wanting to cross to Europe and a source of migration, but a land of welcome as well, recalling that since 2013, it adopted a policy of legalization of illegal migrants that resulted in 50 thousand being accepted as legal foreign residents, in addition to some 12 thousand sub-Saharan students who study in Moroccan universities, 90 % of which living on scholarships provided by the Moroccan government. “As MP, we applaud Moroccan government humane efforts to protect the dignity and rights of migrants and vulnerable victims of Mafia and organized crime,” he said in this letter, noting with satisfaction how the Morocco Royal Navy rescued nearly 15,000 people at sea in 2021 and 2384 in 2022. In addition, Haddad said that the Moroccan MPs encourage the Moroccan Government to consolidate its policy of humane and rights-based approach to migration, while favoring a safe return of migrants to their countries of origin, with respect for their rights and dignity and in coordination with African countries. “Migration cannot be managed through a security approach alone; reinforcing legal and mutually beneficial migration, alleviating visa procedures for professionals, entrepreneurs, students and seasonal workers, along with a sustainable and more efficient development of countries of origin, and through an effective international aid program and the creation of a space of virtuous growth and prosperity around the Mediterranean, in North Africa and the Sahel regions are real and effective entry points for a successful EU-and-partners strategy for migration,” he pointed out. He added that the international context is such nowadays that attempts at illegal migration will only get exacerbated, referring to post-Covid disruptions, war in Ukraine, skyrocketing food and energy prices, the weaponization of energy by some countries in Eastern Europe and North Africa, rising instabilities in the Sahel, North Africa, the Black Sea and the South China Sea, which will lead not only to the increase of migrants and refugees but to the weaponization of migration for political purposes. Haddad also stressed that it is time to rethink partnerships and neighborhood policies to work towards a more sustainable and mutually beneficial approach to migration that protects borders and national sovereignties while opening reasonable doors for a legal and sustainable movement of people between Northern and Southern countries. Shared prosperity is key to this new model of neighborhood policy between Europe and its Southern partners, he said. Referring to the assault of June 24, Haddad underlined, in this letter, that these “migration mafias” (described as such by the Head of the Spanish Government) are organized groups that exploit the aspirations and desires of African migrants hoping to improve their socio-economic situation to serve their human trafficking agendas, adding that these tragic events mark a huge shift in the methods used by the human trafficking and illegal migration and organized crime networks to storm the fences and attack security forces to get as many migrants as possible beyond the fence and into Melilla. “The attacks have become over the last years more violent, more organized and more lethal,” he said, noting that various militarized and well-trained elements cross the Great Sahara desert and from there traverse Algeria to cross into Morocco. He added that the June 24 assault only confirms this reality, noting that the leaders of the migrant mafia are trained in violent street fighting, guerrilla warfare and the manufacture of makeshift weapons. Haddad also said it is highly likely that some of them were trained by organized criminal groups roaming the vast Sahel and Great Sahara region. The change in methods from “mildly violent” (in the past) to “dangerously lethal” (most recently) “denotes a dangerous change that we need all (EU, North African and Sahel countries) to reckon with and factor in as part of our future collaboration efforts to fight organized crime and illegal and violent migration”, he concluded.