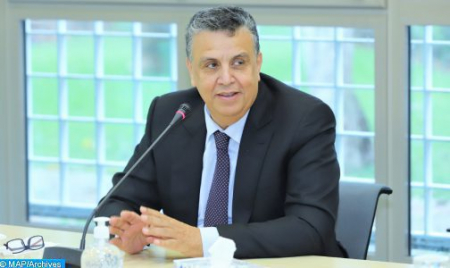 The government is committed, through its 2021-2026 program, to complete the implementation of important projects resulting from the constitutional reform, with a view to consolidating the democratic choice and enshrine human rights and the rule of law, said Tuesday in Rabat, Minister of Justice Abdellatif Ouahbi. Speaking at the last meeting of regional consultations for the preparation of the national report under the fourth cycle of the Universal Periodic Review (UPR), organized by the Interministerial Delegation for Human Rights (DIDH), Ouahbi said that the Delegation has managed, in a short time, to hold 12 regional consultation meetings on the mechanism of the UPR, as part of preparations for the presentation of the said report to be discussed next November. This initiative aims to place human rights issues and interaction with the relevant UN mechanisms at the heart of the concerns of the various actors involved in their promotion at the territorial level, with the same degree of interest as at the national level, he stressed during this regional meeting held in the presence of representatives of government departments, civil society organizations, academics and international partners of the DIDH. According to the minister, this meeting is the final stage of the national consultation process, which will be completed by meetings with the Parliament and civil society organizations, before moving to the final preparation stage to discuss the national report. Ouahbi recalled that the government’s vision is based on an approach in which human rights are a major cross-cutting issue in public policies, and whose commitment to its implementation is a shared responsibility between the various actors, which makes public debate and cooperation a constant factor in government policy on human rights, which today needs qualitative initiatives.