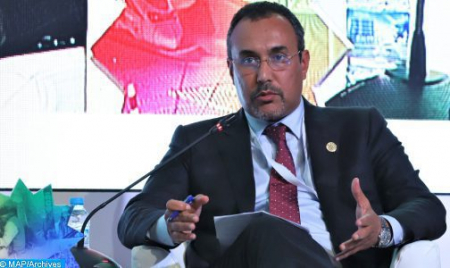 The President of the Dakhla-Oued Eddahab Region Council Yanja El Khattat highlighted, Tuesday in Rabat, the significant progress achieved in Morocco’s southern provinces in terms of advanced regionalization implementation. Speaking at the 2nd conference of the second edition of “MD Talks”, El Khattat noted that these advances are in line with the new development model and the development model of the southern provinces. Placed under the High Patronage of HM King Mohammed VI, this conference is part of the 2022 edition of “MD Talks”, a cycle of conferences of African and international strategic thinking. Advanced regionalization is a form of local autonomy aimed at ensuring sustainable territorial development, in accordance with the specificities of each region, the official said.  Morocco’s southern provinces, he added, are experiencing a significant development momentum, since the implementation of the development model of these provinces (2016-2021), whose launch was given by HM King Mohammed VI on the occasion of the 40th anniversary of the Glorious Green March (2015). This program aims to develop the southern provinces by strengthening infrastructure, fostering investment, supporting entrepreneurship, and promoting human development projects, El Khattat recalled. The local official highlighted the dynamics of investment in his region, noting that the city of Dakhla is located halfway between the cities of Agadir and Dakar, which makes it an area of openness to sub-Saharan Africa. “Advanced Regionalization: For a Regional Integration to Ensure Success of the NMD” is the theme of this conference that kicked off Tuesday in Rabat, at the initiative of media outlet “Maroc Diplomatique” in collaboration with the Konrad Adenauer Stiftung Foundation.