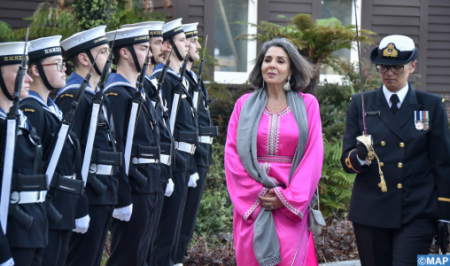 Morocco’s Extraordinary and Plenipotentiary Ambassador to New Zealand, with residence in Canberra (Australia), Wassane Zailachi, on Wednesday handed her credentials to the Governor General of New Zealand, Dame Cindy Kiro. During this audience, which took place in the presence of representatives of the ministry of Foreign Affairs and Trade of New Zealand, Dame Cindy Kiro instructed the Moroccan diplomat to convey her best wishes to HM King Mohammed VI. The Governor General underlined that her country highly appreciates the cooperative relations, particularly economic, with Morocco, one of the largest regional sources of imports for New Zealand. The two countries enjoy good relations that continue to develop and deepen, said the Governor General, recalling that the signing of two Memorandums of Understanding in 2018 represents a crucial step for the strengthening of relations between Rabat and Wellington. Dame Cindy Kiro highlighted the common commitment of the two countries to international security, noting that as a founding country of the Global Counterterrorism Forum “GCTF”, New Zealand values efforts made by Morocco as a key player in the fight against terrorism. The New Zealand official welcomed Morocco’s attachment to democratic values and the promotion of the role of women in the economy and in society in general. For her part, Ms. Zailachi expressed her determination to work to further develop bilateral relations, strengthen political relations and expand economic and cultural exchanges between the two countries to enable them to reach their full potential. The Moroccan diplomat highlighted on this occasion the assets of Morocco as well as the kingdom’s ambition to pursue its development momentum centered on the human element, within the framework of the New Development Model.