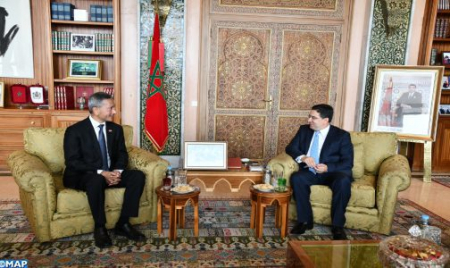 The celebration of the 25th anniversary of diplomatic relations between Morocco and Singapore aims to enrich the content of these relations and set up a roadmap for their future development in all areas, said Monday in Rabat, the Minister of Foreign Affairs, African Cooperation and Moroccans Abroad, Nasser Bourita. During a joint press briefing with the Singaporean Minister of Foreign Affairs, Vivian Balakrishnan, after a meeting between the two officials, Bourita described as “important and historic” the visit to the Kingdom by his Singaporean counterpart, since it is the first visit to Morocco of a Singaporean foreign minister since the establishment of diplomatic relations between the two countries. This visit aims to give a strong impetus to bilateral relations, based on solid foundations of friendship and permanent dialogue, as well as on strong historical relations, he added, noting that Balakrishnan handed over, during this meeting, an invitation sent by the President of the Republic of Singapore to HM King Mohammed VI to visit this friendly country. In addition, the two ministers agreed on a number of mechanisms to promote bilateral relations in the coming years, including conventions signed around cooperation in the field of climate, the cooperation agreement between the two countries in a tripartite framework including the African continent, as well as several conventions ready for signing and which relate to the areas of investment protection, civil aviation and cooperation in the tourism sector, said Bourita. These conventions are likely to enrich the legal framework of relations between the two countries, he stressed, noting that the meeting also provided an opportunity to discuss several regional and international issues. Morocco and Singapore share the same orientations based on the respect of the international law and the multipartite and common action in order to face the big challenges, the minister noted. “Morocco and Singapore share the same conviction that issues such as the fight against terrorism, climate change and immigration, among others, cannot be solved by a single country, but require international cooperation, joint action and coordination between states,” he said. “We are therefore convinced of the need to act together at the international and multi-stakeholder levels, in order to advance a new approach to these issues, starting from our respective regional and national contexts, but sharing the same direction and vision in the face of these challenges,” Bourita continued. Morocco sees Singapore as a gateway to Asia, and this as part of the willingness of HM the King to diversify the Kingdom’s partnerships, he said, emphasizing the developed relations that Morocco has with this country. In the other sense, Morocco is positioned as a gateway for Singapore to the African continent and the Arab world, he said. “It is within the framework of this complementarity and coordination that we can strengthen bilateral cooperation,” said the minister. He also expressed the hope to carry out sectoral visits of Moroccan ministers in Singapore and vice versa, in order to strengthen bilateral cooperation in all sectors with a strong potential for cooperation.