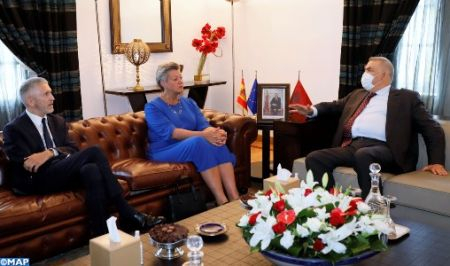 As part of the regular political dialogue between the Kingdom of Morocco and the EU, the European Commissioner for Home Affairs, Ylva Johansson, and the Spanish Minister of Interior, Fernando Grande-Marlaska, met, Friday in Rabat, the Moroccan Minister of Interior, Abdelouafi Laftit. While highlighting the successful results of their cooperation based on shared responsibility in the field of migration, they agreed to renew their partnership to face, together, the networks of trafficking in persons, especially following the emergence of new and extremely violent modus operandi adopted by these criminal networks, said a joint press release issued at the end of the meeting, adding that they denounce the actions of these networks, their accomplices and all those who help them. The Commissioner and the Ministers deplore all the deaths of people trying to emigrate irregularly, including those that occurred during the recent painful events of 24 June 2022. They also deplore the injuries, including among Moroccan and Spanish law enforcement officials, the same source added. These events, in addition to their dimension of human tragedy, demonstrate the extreme danger and violence of human trafficking networks that are ready to all risks, stressed the joint press release, noting that investigations are under way to clarify the aspects related to these events. The European Commissioner and the two Ministers welcomed the fact-finding mission carried out by the National Human Rights Council of the Kingdom of Morocco to establish the facts, respect for fundamental rights being a value shared by Morocco and the European Union, the same source said. The new operational partnership in the fight against human trafficking between the Commission and Morocco could cover, among other things, support for border management, strengthening police cooperation, including joint investigations, raising awareness of the dangers of irregular migration, as well as strengthening cooperation with European Union agencies in charge of home affairs, the source explained. The joint press release said that Morocco is a strategic and committed partner of the European Union with which the partnership in the field of migration goes back several years, noting that the National Strategy for Immigration and Asylum (SNIA) is now a model of migration management of the most advanced, both at the legislative and institutional levels, which has regularized the administrative situation of several thousand migrants and integrate them into Moroccan society. Morocco is also one of the founding states of the Rabat Process and His Majesty King Mohammed VI is designated by his fellow African Heads of State as the leader of the African continent on migration issues, the same source said. Morocco’s operational efforts prevent tens of thousands of irregular departures to Europe with a significant number rescued at sea, recalled the release, noting that the Kingdom has also proceeded, during the same period, to the dismantling of a hundred criminal networks of human trafficking. Under the new pact on migration and asylum, the Commission is developing migration partnerships with countries of origin, transit and destination to combat human trafficking networks, but also to address the root causes of migration and improve opportunities for legal migration, so that people do not feel the need to risk their lives on dangerous journeys, the joint press release concluded.