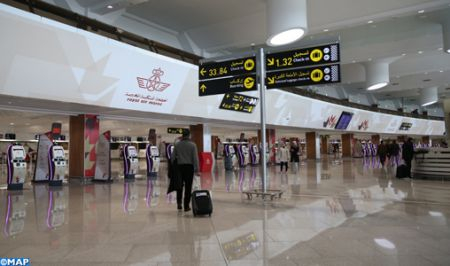 The Kingdom of Morocco launches, as of July 10, 2022, the electronic visa (eVisa) procedure via the platform www.acces-maroc.ma, to facilitate the granting of visas to foreign nationals subject to this formality. This new measure has been put in place in accordance with the very high directions of HM King Mohammed VI to improve, simplify and modernize consular services, a press release from the Ministry of Foreign Affairs, African Cooperation and Moroccans Abroad said on Friday. It is part of the ongoing efforts made by Morocco, both at the national and international levels, to digitalize the services provided by the public administration, said the same source, adding that it enshrines the modernization of consular work at the level of Diplomatic Missions and Consular Posts of the Kingdom, as recommended by the strategy of the Ministry concerning the reform of this area. This electronic visa is a one-time authorization that is valid for a maximum of 180 days from the date of issue. It will allow access to Moroccan territory for a stay of up to 30 days. Three categories of foreign nationals will benefit from the “eVisa”. These include nationals of countries, the list of which is defined by the competent Moroccan authorities (Thailand and Israel as a first step); foreign nationals holding a residence or stay permit valid for at least 180 days on the date of application for the e-visa and residing in one of the EU countries, the United States, Australia, Canada, the United Kingdom, Japan, Norway, New Zealand and Switzerland as well as foreign nationals holding non-electronic visas of Schengen countries, the United States Australia, Canada, the United Kingdom, Ireland, and New Zealand, with multiple entries and that are valid for at least 90 days as of the date of submission of the e-visa application, according to the same source. Applications for “Tourist” or “Business” visas submitted online by the nationals concerned via www.acces-maroc.ma will be processed within 24 hours (Express Visa) and 72 hours (Standard Visa). For the launch of the “eVisa”, the Ministry has established, in coordination with the relevant Departments, a legal framework for the eVisa and means of data exchange in this regard. The processing of applications for “eVisa”, within the deadlines set, will be done by executives, trained for this purpose, via the platform www.acces-maroc.ma, developed by engineers and technicians of this Department, the statement concluded.