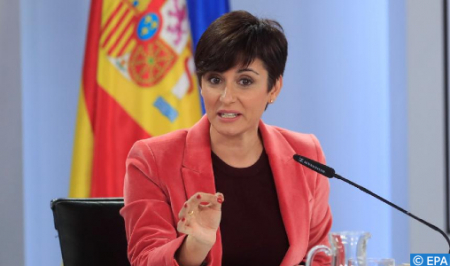 The Spanish government reiterated, Thursday, the importance of reinforcing its relations with Morocco, which is a “neighbor and a reliable partner.” “Morocco is, without doubt, a reliable partner and neighbor,” said the Spanish government spokeswoman, Isabel Rodriguez, who was the guest on a program aired on Spain’s Antena 3 TV channel. Highlighting the multiple partnerships between Rabat and Madrid, the Spanish official noted that the cooperation between the two countries encompasses significant areas of common interest. Morocco is an important neighbor with which we must maintain good relations, not only in terms of management of migration flows but also in the economic sphere,” she stated. The Spanish government – through its president Pedro Sanchez and officials heading key ministries – has repeatedly reaffirmed its determination and commitment to further developing relations between the two countries, in line with their new roadmap. The joint declaration adopted last April by Morocco and Spain, at the end of discussions between HM King Mohammed VI and the President of the Spanish government, Pedro Sanchez, underlined that the two countries have opened a new stage in their bilateral relations. This new stage responds to the call of His Majesty King Mohammed VI, to “inaugurate an unprecedented stage in the relations between the two countries”, and of His Majesty King Felipe VI to work together to materialize this new relationship. It is also in line with the desire of the President of the Spanish Government, Pedro Sánchez, to “build a relationship on more solid foundations.”