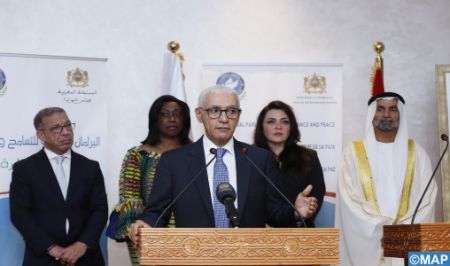 HM King Mohammed VI has established peace as a doctrine for the Nation, as well as for His country and as a political and ethical culture governing the official orientations of state institutions, said speaker of the House of Representatives, Rachid Talbi Alami. Speaking at the opening of the 10th session of the Global Parliament for Tolerance and Peace held from 13 to 15 July in Rabat and Dakhla, Talbi Alami highlighted the political, human, cultural and civilizational dimensions of this event, held in an Arab, Muslim, African and Mediterranean country, whose Kings, the late HM Mohammed V, the late HM Hassan II and HM King Mohammed VI, have always advocated the values of tolerance and peace. Talbi Alami stressed, in this regard, the major role played by the Kingdom, contributing to the installation of a climate of trust and building bridges of dialogue between the three monotheistic religions, through the many conferences and forums organized at this level. He recalled, in this context, the trip of the late Pope John Paul II to Casablanca in 1985, at the time of the late HM Hassan II, as well as the historic visit made by Pope Francis in Rabat in 2019, during which His Holiness had been received by HM King Mohammed VI, Commander of the Faithful. Also, the speaker of the House of Representatives highlighted the role of HM King Mohammed VI in supporting the initiatives of tolerance and peace in the Middle East, especially in the service of Al Quds Asharif and its sacred places and causes, as well as the willingness and sincere efforts of the Sovereign to achieve fair and equitable solutions to this troubling issue. He noted that the holding of the 10th session of the Global Parliament for Tolerance and Peace in Morocco is an opportunity to reaffirm the Kingdom’s active adherence, under the enlightened leadership of His Majesty the King, to the global dynamics for peace. Talbi Alami recalled that Morocco has always contributed in a tangible way to the commitments of the international community regarding peace, security and stability, including those related to climate change and the environment, migration, human rights and transitional justice, as well as various economic, social, cultural, linguistic issues and those of the fight against terrorism, extremism and organized crime.