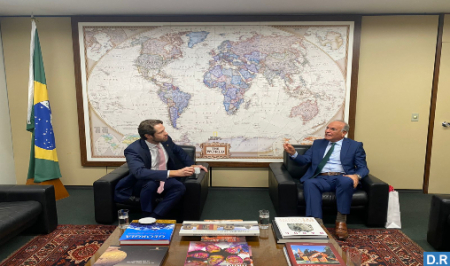 President of the Committee on Foreign Relations and Defense (CREDN) in the Brazilian Chamber of Deputies, Pedro Vilela, reiterated the commitment of the Brazilian legislative institution to strengthen the Moroccan-Brazilian strategic partnership, especially through the upcoming adoption of the bilateral agreement for the facilitation of investment, signed in June 2019 in Brasilia. “We will work to have this agreement approved before the end of the year. We are aware of the strategic importance of Morocco for Brazil, especially in the import of fertilizers,” said Pedro Vilela during a recent meeting with the Moroccan ambassador to Brazil, Nabil Adghoghi. “The presence of OCP in the port of Itaqui (northern Brazil) is a perfect illustration of this fruitful partnership,” added the deputy of the Brazilian Social Democracy Party (PSDB). For his part, the Moroccan ambassador expressed the ambition of the Kingdom to raise relations with Brazil to a strategic partnership. “Morocco wants to strengthen its strategic partnership with Brazil, with food security and logistics connectivity as structural pillars. The Kingdom is committed to a stronger engagement with Brazil on issues related to regional integration in the South Atlantic,” added the Moroccan diplomat. Regarding the Moroccan Sahara issue, the ambassador explained to the President of the Committee on Foreign Relations and Defense the growing support for the Moroccan autonomy initiative. While welcoming the position of Brazil through a constant support to the efforts of the United Nations in the search for a political solution to the Sahara dispute, Adghoghi expressed the expectation of Morocco to see Brazil join this international dynamic in favor of a solution within the framework of the sovereignty and territorial integrity of Morocco.