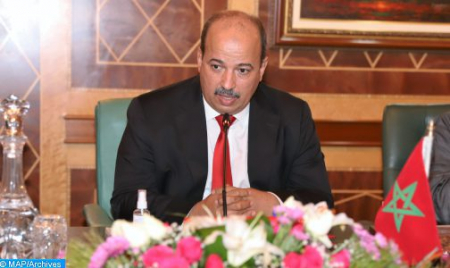 Speaker of the House of Advisors, Naama Mayara stressed, Saturday in Nouakchott, the importance of parliamentary friendship committees in supporting parliamentary action and the development of Morocco-Mauritania cooperation. Speaking at a meeting with the Mauritania-Morocco Parliamentary Friendship Group, Mayara, who is on an official working visit to Mauritania leading a large parliamentary delegation, noted the firm commitment of the parliaments of both countries in strengthening bilateral relations. In this context, he called for the strengthening of South-South dialogue, explaining that what the countries of the South share with each other, whether it is history, the present or the future, is much stronger than what unites them with the countries of the North. In this regard, he recalled the opening of the House of Advisors to Latin America through the creation of the Afro-Latin American Parliamentary Forum, inviting Mauritania to join this grouping. He stressed the importance of developing bilateral parliamentary relations to serve the interests of both peoples, especially in the economic field. For her part, president of the Mauritania-Morocco Parliamentary Friendship Group, Zeinab Bint El Taqi, said that the members of the group wish that these bilateral relations take an increasingly important trajectory. After noting that relations between the two countries are “existential, non-traditional and dynamic”, she said the ambition is to set them up as an “exemplary” partnership between the two countries in terms of economic integration with tangible results on the ground.