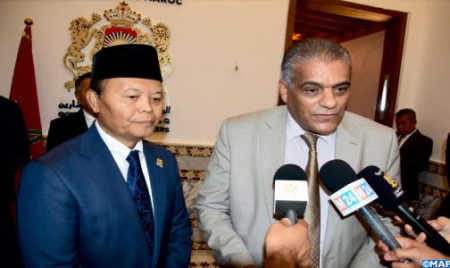 First vice-speaker of the House of Advisors (upper house), Mohamed Hanine, had talks on Monday in Rabat with the deputy-speaker of the Consultative Assembly of Indonesia, Mohamed Hidaya Nour, who is on a working visit to Morocco at the head of an important delegation. The two parties welcomed the pioneering roles of the two countries in serving the just causes of the Islamic Ummah, particularly in the fight against campaigns aimed at undermining the religion, said a statement from the upper house. During these talks, which took place in the presence of Indonesia’s ambassador to Morocco, Hidaya Nour stressed that his visit to Morocco is part of the fruitful exchanges and constructive dialogue with the Moroccan parliament. For his part, Mr. Hanine highlighted the excellent relations between the two countries which continue to grow stronger, under the leadership of His Majesty King Mohammed VI and the President of the Republic of Indonesia. He expressed, in that regard, his wish for the establishment of a Morocco-Indonesia parliamentary friendship group as soon as possible to support the dynamics of bilateral cooperation relations in all areas.