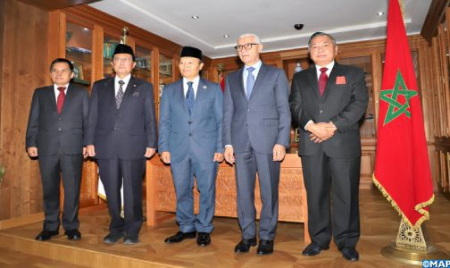 Speaker of the House of Representatives (Lower House), Rachid Talbi Alami, held on Monday in Rabat, talks with a delegation of the People’s Consultative Council of the Republic of Indonesia, chaired by its Vice Speaker, Hidayat Nur Wahid, who is on a working visit to Morocco. The talks, which took place in the presence of Indonesia’s ambassador in Rabat, focused mainly on bilateral relations, parliamentary cooperation between the two countries, and several issues of common interest, a statement from the Lower House said. On this occasion, Talbi Alami highlighted the distinguished parliamentary relations between Morocco and Indonesia, praising the successful organization of the 144th Assembly of the Inter-Parliamentary Union (IPU) which took place in Bali, Indonesia. He also recalled the excellent relations between the two countries, which draw their essence from historical, cultural and religious crossroads, the statement added. After reviewing Morocco’s parliamentary experience, Talbi Alami stressed the importance of parliamentary diplomacy and its role in dialogue, communication and exchange of experiences and expertise, to meet the challenges imposed on the national, regional and international parliamentary agenda such as health, climate change, renewable energies, innovation in education and digital transformation, the fight against terrorism and the rejection of hate speech, as well as migration. For his part, Hidayat and the delegation accompanying him expressed their thanks to the Speaker of the House of Representatives for the warm welcome and reviewed the development of Moroccan-Indonesian relations, marked by cultural, intellectual and religious convergence of both countries. The head of the Indonesian delegation referred to the specificity of Indonesia’s parliamentary and representative system and suggested the creation of a parliamentary forum that would include the Member States of the Organization of Islamic Cooperation, to promote cooperation, dialogue and exchange of experiences and expertise. The Indonesian MP added that discussions and consultations regarding the forum have been launched with several Speakers of Parliaments of Islamic countries in the hope of announcing its launch next October. In this regard, Talbi Alami addressed the positive aspects of the idea of the parliamentary forum, especially the opening of new spaces for sharing experiences of unicameralism and bicameralism, and for discussion without undermining the prerogatives and missions of regional and international parliamentary institutions and organizations. The talks were also an opportunity to discuss Morocco’s and Indonesia’s parliamentary experiences and political institutions, as well as the latest developments in bilateral and multilateral parliamentary affairs, the statement concluded.