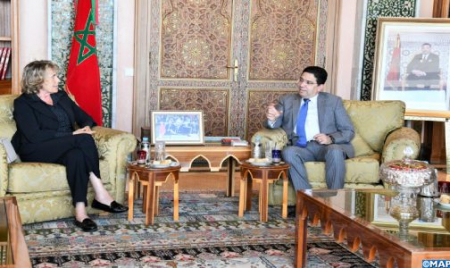 Minister of Foreign Affairs, African Cooperation and Moroccans abroad, Nasser Bourita, received, Tuesday in Rabat, the Chairperson of the Italian Senate’s Commission for Foreign Affairs and Immigration, Stefania Craxi. Ms. Stefania Craxi is on a working visit to Morocco to take part in the presentation ceremony of the mid-term review of the Morocco-EU Twinning entitled “Support to the House of Advisors.” Launched on May 16, 2021, for 18 months, the twinning brings together a consortium of Parliaments of seven EU Member States. Ms. Craxi was also received by the Speaker of the House of Representatives, Rachid Talbi Alami. During this meeting, the two parties discussed the parliamentary relations between Morocco and Italy, which have been strengthened over the past decade through cooperation programs, twinning, exchange of expertise and strengthening the role of friendship groups, as well as through coordination and parliamentary communication on bilateral and multilateral levels.