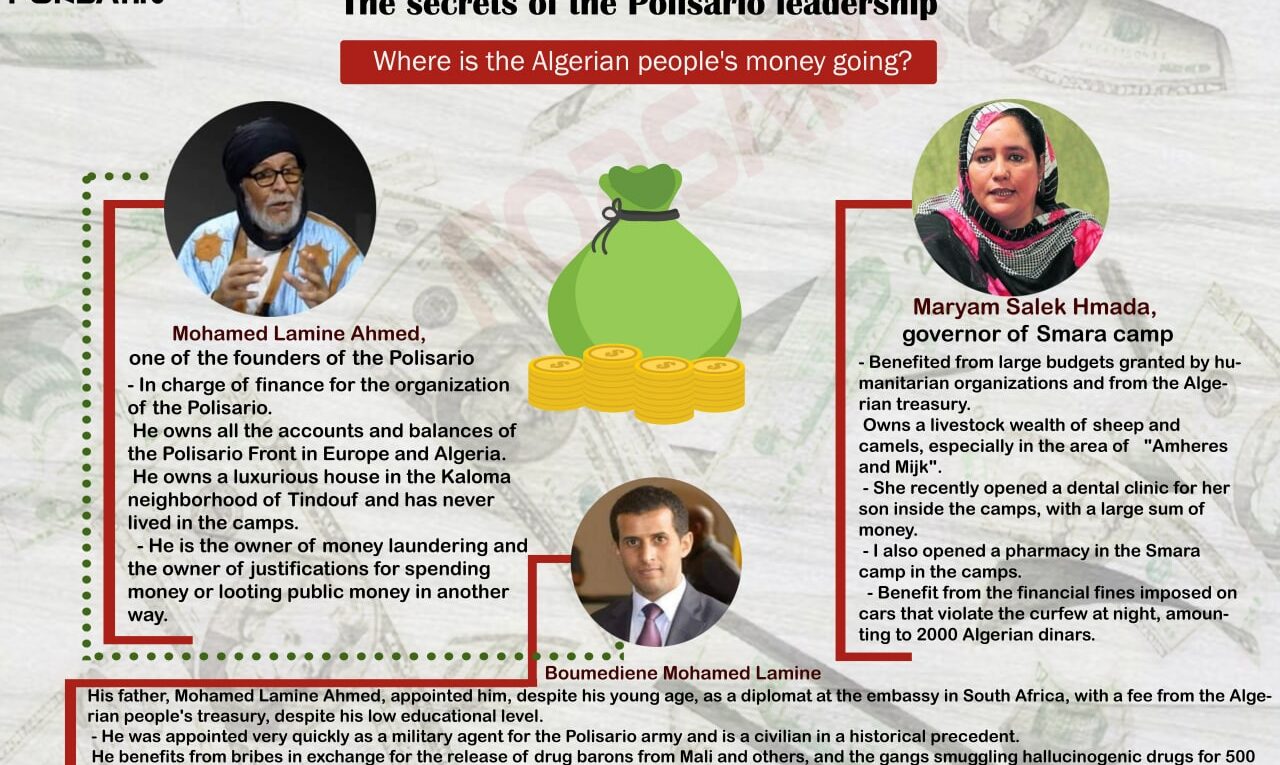 Who remained of the Polisario leadership who did not steal from the money of the Algerian people ?
The residents of Tinduf camps, are following with a big interest and regret « the news about the scandals of the leaders of the Polisario Front ».
The simple citizens of the camps are stunned, horrified and disappointed about the leaders of Polisario. Those same leaders who daily talk about austerity, patience, self-denial, expressions of enthusiasm, encouragement, ask for patience and steadfastness from the oppressed in the camps, meanwhile they smuggle money, run networks of mafias and gangs. They are also involved in money laundering.

Today, the truth about the thieves in the Tinduf camps is revealed. This gang of leaders have rotated chairs for nearly half a century. Among them those who have held the same position more than 3 times. Once a leader quits a position, he or she goes to another one, and so on.

Many leaders and officials of the Polisario front have held their positions for too long, such as the foreign minister who have managed this office for more than three decades. Those officials do not budge. The reason behind maintaining the leadership by the same gang, is that those leaders embezzle the Algerian money and the international aids which are destined to the camps.

The only reason of staying in chairs for polisario leaders is the money.
So, from where does this « poor leadership » get the money to take care of the children in the camps, the expenses of their studies abroad, and the exorbitant costs of residence and registration in the most prestigious universities, if not by collecting aid money.
From where does it get the money of marriages, parties and family holidays, if this Gang of leaders did not smuggle the medical equipment granted by international organizations.
If they did not deal with drug trafficking , and promote contraband, they won’t be able to buy real estate and luxury properties all over the world.
From where this « poor leadership » comes with the expenses of medical projects and the costs of building exorbitant hospitals for their children abroad, and invest in companies, if this « poor leadership », do not
coordinates with terrorist groups in the region, and facilitates their operations and transfers.
From where does it get the money of travelling all over the world, buy plane tickets, and book in luxury and prestigious hotels and residences all over the world, besides giving luxury gifts to their friends and host parties of extravagance and promiscuity with the mistresses, if not by taking the money of Algeria and its population, benefit from its fuels, its vehicles, from Diplomatic passports, and official residences and wide relations.

Do not oppress the leadership of the Polisario, because the struggle is costly the troubles are many.

It is sufficient for the inhabitants of the Tinduf camps that the leadership stays in the camps for a day. Appears from time to time in a meeting. Get on line on WhatsApp and manage many groups since it facilitates, sharing patriotic instruments to the militants, and exciting them with vocals. Then, from time to time, in honor of their struggle, they throw crumbs at them, and ask them for patience.
It is to be noted that the Leadership is interchangeable and inherited. You only need one condition. Wait for the leader’s death to be replaced by a new one. The wait may take half a century or longer. Be patient, so one day you will be a leader.