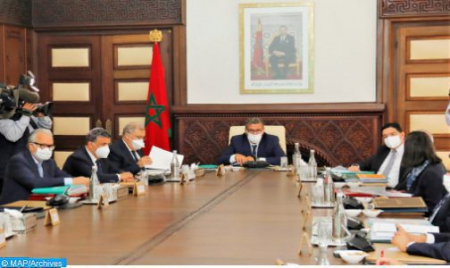 The Council of Government, convened Thursday by videoconference under the chairmanship of the Head of Government, Aziz Akhannouch, adopted the draft decree No. 2.22.491 on the storage and manufacture of explosives for civil use, fireworks and materials containing pyrotechnic substances, as well as the arrangements for guarding, safety and security of warehouses and factories. Speaking at a press briefing after the weekly meeting of the Council of Government, Minister Delegate for Relations with Parliament, Government Spokesman Mustapha Baitas, said that this draft decree was presented by Minister of Energy Transition and Sustainable Development, Leila Benali. He said that this text, which comes under the implementation of Law 22.16 (July 5, 2018), includes provisions setting the procedures for granting permits for the establishment and operation of depots, transfer of a deposit of first category and cessation or resumption of its operation, as well as the procedures for declaring a cabinet or group of cabinets and the modalities of development and operation of the deposits and cabinets. The provisions of this draft decree also set out the procedures for authorizing the establishment and operation of factories, the transfer and cessation of activity of a factory that has been shut down, as well as those defining the guarding, safety and security arrangements.