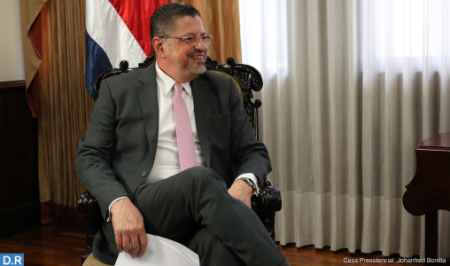 Costa Rica’s President Rodrigo Chaves hailed “the very strong leadership of His Majesty Mohammed VI” which has allowed Morocco to consolidate the values of democracy and human rights. In an interview granted to the Moroccan news channel M24 broadcast Monday, the Costa Rican head of state said that the leadership of the Sovereign is “very strong” in the field of consolidation of human rights, democracy, sustainable development and environmental preservation, stressing that these values are shared by Costa Rica and Morocco, alongside their friendly countries in the European Union, as well as other democratic countries in the Americas. Referring to the ceremony of his inauguration last May, Rodrigo Chaves said he was “very honored that His Majesty the King sent the head of government to Costa Rica” to represent him at the ceremony, adding that he perceives “with great enthusiasm and hope” the possibility that the two countries can move forward in strengthening their cultural and economic relations and work together in the concert of nations to “advance our common interests, because despite the fact that we are geographically distant, I believe that our friendship will give us many benefits”. Rodrigo Chaves stressed that “Morocco is indeed a great country, with a long history. Personally I love the city of Marrakech, the Moroccan gastronomy and all the beautiful things you have”. He added that Morocco is “a very important country in the history of the world” that shares with Costa Rica “a deep commitment to respect human rights.” The president of Costa Rica took this opportunity to send “a very cordial greeting to the people of Morocco, especially to His Majesty Mohammed VI. I am honored that His Majesty had sent me his congratulations following my election as president (…) May God protect His Majesty. May God protect all the people of Morocco, may he bless you with peace, prosperity, work and opportunities, because you already have an impressive country, and may you manage to generate the prosperity that the Moroccan people deserve”.