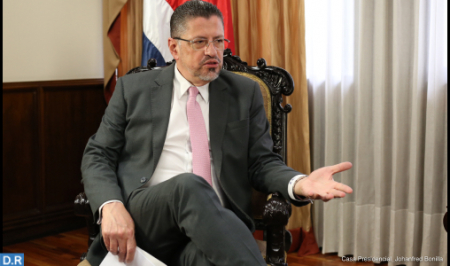 Costa Rica and Morocco, which are endowed with important potentialities, are called upon today to give a new impulse to their bilateral cooperation at all levels. In an interview with the Moroccan news channel M24 broadcast on Monday, the president of Costa Rica said that at this stage “the only thing to do is to make more efforts in a relationship, which is already very strong at the diplomatic level, but which should be even stronger in the cultural, political, economic, export, investment and tourism fields.” Rodrigo Chaves added that in a world in perpetual change, “Morocco, like Costa Rica, are countries that are modernizing very quickly and we want to establish relations of mutual interest”. Reviewing the enormous potential of both countries in the agricultural and tourism fields, the Costa Rican head of state listed, in the case of Morocco, the desert, the Mediterranean and a thousand-year-old history. Regarding Costa Rica, Chaves emphasized the lush nature, mountains, jungles and tropical beaches, urging to encourage tourism to these two destinations so different. Chaves also called for the promotion of trade and investment between the two countries. For example, “there are tourism groups in Morocco that can invest in Costa Rica, in addition to continuing to collaborate on the cultural component, through a win-win relationship in the context of South-South cooperation,” he insisted. In the same context, Chaves welcomed the joint action taken by Morocco and Costa Rica “in the development center of the Organization for Economic Cooperation and Development (OECD), which is the organization responsible for promoting and sharing the best public policies in the world. Chaves added that Morocco could be a gateway of Costa Rica to “the huge African continent whose population is close to that of China or India,” just as Costa Rica can be a gateway to Morocco in Central America, and beyond, to the entire American continent. In this regard, Chaves explained that “Costa Rica is bound by free trade agreements with almost all countries in the region, including Mexico, the United States and Canada,” which would allow Moroccan operators to export their products to these countries “without paying duties and with preferential access”.