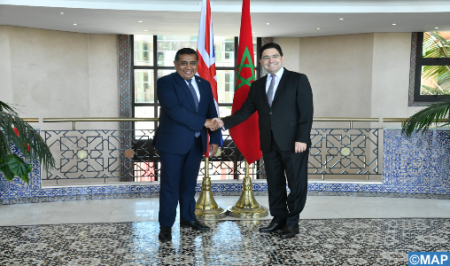 It is time to take the “distinguished” relations between Morocco and the United Kingdom to the highest level, said Lord Tariq Ahmad, British Minister of State for Foreign Affairs for South and Central Asia, North Africa, the UN and the Commonwealth, currently on a working visit to Morocco. The 300th anniversary of the signing of the first trade treaty between the two countries is an appropriate opportunity to strengthen the ambitions and raise bilateral relations to a higher level, said the British official in a statement to the press after his talks with the Minister of Foreign Affairs, African Cooperation and Moroccans Abroad, Nasser Bourita. This fruitful and constructive meeting with Bourita was an opportunity to examine ways to strengthen relations between the two countries, he said. The British minister said that relations between the two kingdoms are based on solid foundations especially in the field of trade, sustainability, cooperation on issues of common interest, such as climate change, noting that these bases are likely to contribute to the further consolidation of these ties. The discussions also focused on the need to improve relations between the two countries and the two peoples, particularly in education, he added.