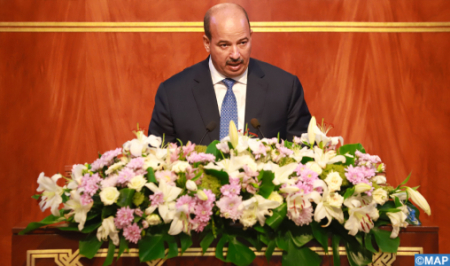 The Moroccan House of Advisors will become the second institutional member of the African Parliamentarians’ Network on Development Evaluation (APNODE), after the Parliament of Zimbabwe, announced its speaker, Naama Mayara, Tuesday in Rabat. Speaking at the 7th Annual General Meeting of APNODE, held in Rabat, under the theme “Effective parliamentary public engagement for inclusive development”, Mayara highlighted the undeniable efforts of Morocco for the development of the African continent, announcing that the upper house will become the second institutional member of APNODE after the Zimbabwean parliament. Morocco, as the first investor in West Africa and second continental investor, works tirelessly for the progress and development of Africa, said the speaker of the House of Advisors, stressing the need to deploy more efforts to achieve the Sustainable Development Goals (SDGs). He considered it imperative to mobilize the efforts of the various African parliaments, in order to strengthen the continental legislation and public policies to achieve the SDGs by 2030 and the programs of the African Union agenda by 2063. To this end, Mayara, called for the creation of parliamentary think tanks at the level of each legislative institution of the continent, while developing objective studies to stimulate African growth.