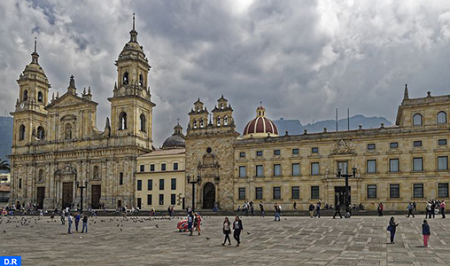 By re-establishing relations with a puppet entity, Colombia’s new president Gustavo Petro has “dealt a blow” to the country and “ruined the excellent relations with Morocco,” according to Colombian news website “Ifm Noticias”. In an editorial under the title “Colombia is no longer in the hands of Colombians,” journalist and writer Edward MacKenzie writes that he is surprised at the fact that Gustavo Petro’s first decision was to “re-establish diplomatic relations with an entity that very few people in Colombia know (sadr).”  “What does that do for Colombia? Nothing. This act is a blow to Colombia and ruins the excellent relations with Morocco.” It is clear that “in taking this unusual step, Gustavo Petro is implementing the agenda set by Podemos and by horrible dictatorships while disregarding the interests of Colombia,” according to the author. This entity is not recognized by “any European country, nor by the United States, nor by Japan, nor by Australia,” he writes. All the states that recognize this entity are “third world countries including North Korea and Cuba… And now Colombia,” the author deplores, wondering “what lies behind this maneuver.” “A political agenda that has nothing to do with Colombia.” The journalist recalls in this context that Spain has recognized the territorial integrity of Morocco over the Sahara, through a letter sent by the president of the government, Pedro Sanchez, to HM King Mohammed VI. MacKenzie also criticizes the “Bolivar’s sword” incident when the new president insisted on presenting the sword on the day of his inauguration on August 7. This act raised tensions with Spain given the symbolic significance of the sword of Simon Bolivar. “With this premeditated sketch, Petro has rendered another service to Podemos and to those who seek to break up the Spanish monarchy,” writes the author. The columnist refers to another decision of Petro’s government that goes against the interests of Colombia: the end of the exploration and marketing of gas from its subsoil, which will be substituted  MacKenzie describes this announcement as an “irrational measure” that will result in a “massive transfer of Colombian wealth to Venezuela.” “At this moment Colombia is out of control. The Senate and the Chamber of Representatives, parties, unions and businessmen, the media directors are brain dead,” Edward MacKenzie writes, speaking of the decisions taken on the first days of Petro’s mandate.  Colombia is now in the hands of a “non-national” group that “executes non-explicit directives where the interests of Colombia, its people, and its territory are not taken into account.” “The construction of Colombia has stopped. We are entering the phase of Colombia’s dismantling and the transfer of national wealth to third countries,” MacKenzie points out. The Colombian State is run by a clique with absolute powers executing obscure extra-Colombian guidelines, none of which have been discussed by the citizens, either before or during the electoral campaign, the writer laments. For now, the situation is the following: there are no counter-powers. There is no constitution and no laws. The clique will override everything and use violence against the sons of Colombia to impose the diktats of the Puebla Group and the Sao Paulo Forum (two blocs of the Latin American left), and those of the powers working to undermine democracy and freedoms in the West, MacKenzie concludes.