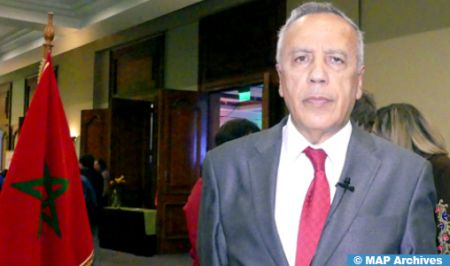 The speech delivered by HM King Mohammed VI on the occasion of the 69th anniversary of the revolution of the King and the People is a “lesson of governance and humanity” and a clear message on the central place of the Sahara issue for Moroccans, said Chilean Human Rights activist, Juan Moraga. The speech “is a lesson of humanity and governance and, above all, a new way to clearly understand that the Sahara is Morocco’s main cause,” Moraga told MAP. “When the Sovereign raised the Sahara issue, he did so with a high perspective. He also warned those who stand on the other side of the fence and make baseless attacks on Morocco” on this central issue, he said. Moraga, a member of the International Organization of “Human Rights without Borders” (DHSF), welcomed Morocco’s outstretched hand to turn the page on this dispute. For the Chilean expert, the Sovereign did not fail to remind the world that the Sahara “is the lens through which Morocco looks at the world.” It is the clear, simple benchmark whereby it measures the sincerity of friendships. “To us as an organization of Human Rights without Borders, the speech of the King of Morocco puts things once again in their place. We highly appreciate his intervention, because it is not only addressed to those inside the country, but also to those outside,” insisted Moraga, stressing the artificial nature of the dispute over the Sahara, which has been created precisely to serve the geopolitical interests of a neighboring country. The Chilean activist denounced in this regard the secret prisons set up by Algeria on its territory to silence “Sahrawi dissidents who previously believed in the polisario but who now feel absolutely disillusioned.” The organization “Human Rights Without Borders welcomes the speech of the King and we will do everything possible to ensure that it is reproduced and known worldwide,” Juan Moraga concluded.