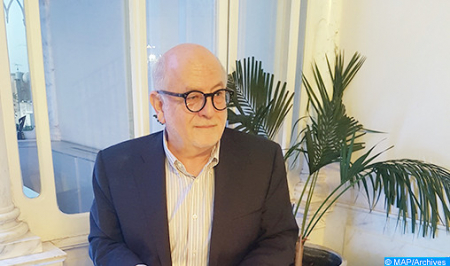 The unity of the internal front and the mobilization of all Moroccans are the cornerstone in defending the Sahara’s Moroccanness and defeating the maneuvers of the enemies, writes the Lebanese journalist Khairallah Khairallah. The Lebanese writer stressed that the royal speech delivered on the occasion of the King and People’s Revolution Anniversary has highlighted the efforts of Moroccans living abroad in the defense of the territorial integrity of the Kingdom, adding that Morocco “reaffirms once again its clear position towards its causes, which are also the causes of every citizen in a Kingdom at peace with itself. Clarity is the key word of the speech, which was an essential step in the affirmation of the symbiosis between the Throne and the People, added Khairallah Khairallah, in an article published in the London-based newspaper “Alarab”. He also explained that when the Sovereign refers to the hundreds of thousands of Moroccan Jews and his pride in their support for their homeland, HM the King shows once again that Morocco does not suffer from any complex, stressing that the Sovereign has constantly advocated and worked for moderation. “It is, therefore, quite natural that Morocco becomes a country recognized by all components of its culture and history, including the Jewish component,” he wrote. The Kingdom of Morocco is a civilized country in which all citizens are equal regardless of their religion, he continued, noting that the Jewish heritage is a source of wealth for Morocco, which is open to its environment and to the world. This openness has played a major role in convincing the international community, and in particular the United States, of the Kingdom’s right to recover its Southern Provinces, which were under Spanish occupation until 1975, stresses the Lebanese writer, noting that everyone is now aware that the issue of the Moroccan Sahara is an artificial conflict and “a war of attrition waged by Algeria against Morocco. “Everyone is aware that, on the one hand, Morocco will not give up its rights over its territory, and on the other hand, the populations of the Southern Provinces are convinced of their belonging to Morocco,” he said, recalling that the Kingdom has fought a long battle to recover its Provinces and to bring most countries to recognize the Moroccanness of the Sahara. The battle led by Morocco, starting with the Green March 47 years ago, is a continuation of the Revolution of the King and the People, which demonstrated the perfect symbiosis between the Throne and the people, Khairallah Khairallah said. Morocco has opted for clarity and self-confidence, rather than empty slogans, which has allowed His Majesty King Mohammed VI to address his people based on constants achieved on the ground, he noted, explaining that the best evidence of these constants is the modern infrastructure with which all Moroccan cities are equipped, including the Southern Provinces.