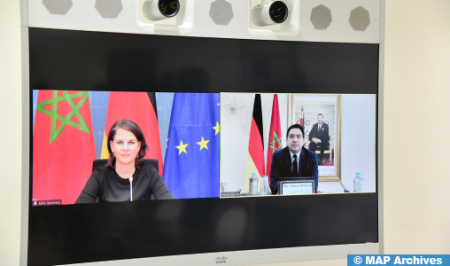 Morocco is an “important” partner for Germany and the European Union (EU) and is also a bridge to North Africa and the south of the continent, said the German Federal Foreign Office. “Relations between Germany and Morocco are not only close between the two governments, but also between hundreds of thousands of people in both countries,” noted the ministry in a statement published on its website. The German Foreign Minister Annalena Baerbock and her Moroccan counterpart Nasser Bourita had agreed, during a video conference last February, to resume and deepen the traditionally close and broad relations between the two countries. Now, five months later, Baerbock made her first visit to the Kingdom where she held talks with Bourita to launch a comprehensive program of “increased” cooperation, the same source continues. Germany and Morocco have agreed to intensify cooperation on an equal footing and mutual respect in all areas, said the ministry, citing in particular areas related to security and energy policy and climate as well as economic cooperation and in the cultural and educational fields. He added that this broad cooperation in various areas should be accompanied by a continuous multidimensional strategic dialogue between the two countries.