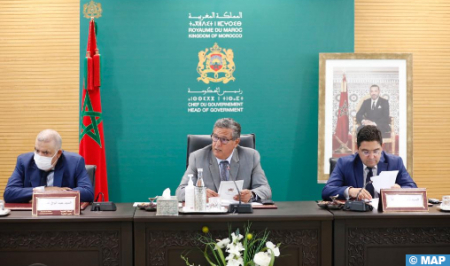 Head of Government Aziz Akhannouch on Tuesday urged all departments and institutions, together with the finance and business sector, to accelerate the deployment of concrete programs to promote the situation of Moroccans abroad, whether outside or within the borders of the Kingdom. Chairing the 9th meeting of the Ministerial Commission for the Affairs of Moroccans Abroad and Migration, Akhannouch stressed that one of the priorities at the current stage is the consolidation of the cultural and spiritual attachment of the Moroccans living abroad, as well as the establishment of a mechanism to support the talents of Moroccans living abroad, to support their initiatives and projects, and to encourage and support their investments, within the framework of the incentives granted by the new Investment Charter. A press release from the Department of the Head of Government indicates that Akhannouch recalled the High Royal Instructions, contained in several speeches delivered by HM the King, notably during the Royal Speech on the occasion of the 69th anniversary of the Revolution of the King and the People, in which the Sovereign laid the foundations for an efficient public policy in terms of management of the affairs of Moroccans living abroad, and for the consolidation of their attachment to their identity and the reinforcement of their contribution to the development of the Kingdom. The Head of Government has, in this sense, called on the members of the Ministerial Commission to focus on the implementation of the necessary measures to deploy the Royal directives, while inviting to ensure the holding of regular meetings of the technical committee resulting from the Commission, in order to ensure the follow-up of the implementation of all decisions and recommendations. He also welcomed the smooth running of the operation Marhaba, organized under the High Patronage of HM King Mohammed VI, may God assist him, which has recorded this year the entry into the national territory of nearly 2.8 million people, a figure that exceeds the level recorded before the pandemic, adds the same source. For his part, Nasser Bourita, Minister of Foreign Affairs, African Cooperation and Moroccans living abroad, said that the Royal Speech of August 20 inaugurated a new approach, which is a roadmap addressing the problem of the Moroccan community established abroad in a comprehensive manner throughout the year, and not only for the periods of reception, according to the statement. The Minister also emphasized the considerable efforts made in favor of the Moroccans of the world, especially in terms of improving the conditions of reception on the national territory, stressing that the optimal implementation of the High Royal Instructions on this subject, requires a parallel action on the institutional and legislative levels. In application of the High Instructions of His Majesty King Mohamed VI, the meeting concluded on the need for the government to continue to work for the integration of the participation of members of the Moroccan community residing abroad in governance bodies and consultative institutions; to proceed as soon as possible to the modernization and upgrading of the institutional framework relating to the Moroccans of the World, especially with regard to the reorganization of the Council of the Moroccan Community Abroad; and to ensure the complementarity of the action programs of the departments concerned with the affairs of the Moroccans of the World and their convergence with the interventions of the Hassan II Foundation for Moroccans residing abroad, underlines the release. The holding of this meeting is part of the high solicitude of His Majesty King Mohammed VI for the affairs and concerns of Moroccans living abroad, and as part of the implementation of the High Royal Instructions, each time renewed, aimed at promoting the situation and defending the interests of the Moroccan community residing abroad, the same source said. The meeting was attended by the Minister of the Interior, the Minister of Foreign Affairs, African Cooperation and Moroccans living abroad, the Minister of Habous and Islamic Affairs, the Minister of Economy and Finance and the Minister of Equipment and Water. This meeting was also attended by the Minister of National Education, Preschool and Sports; the Minister of Health and Social Protection; the Minister of National Planning, Urban Development, Housing and Urban Policy; the Minister of Economic Inclusion, Small Business, Employment and Skills and the Minister of Tourism, Handicrafts and Social Economy. They are also the Minister of Higher Education, Scientific Research and Innovation; the Minister of Transport and Logistics; the Minister of Youth, Culture and Communication and the Minister Delegate to the Head of Government in charge of Investment, Convergence and Evaluation of Public Policies. The President of the General Confederation of Moroccan Enterprises; the President of the Council of the Moroccan Community Abroad; the General Director of the National Agency of Land Conservation, Cadastre and Cartography; the Mediator of the Kingdom; the President of the Moroccan Capital Market Authority; the General Director of the National Social Security Fund; a representative of the Professional Grouping of Moroccan Banks; a representative of the Ministerial Delegation in charge of Human Rights; and a representative of the High Commission for the Plan also took part in the meeting.