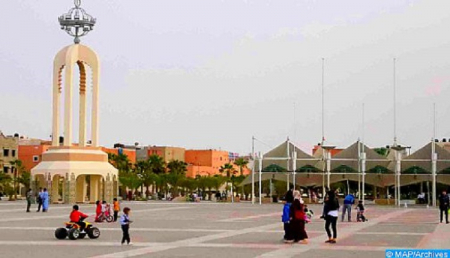 The presidents of the councils of local authorities and professional chambers of the region of Laayoune-Sakia El Hamra have rejected the “unjustified bias” of the Tunisian presidency in favor of the thesis of the foes of Morocco’s territorial integrity. In a statement, they stressed that the welcome extended by Tunisian President Kais Saied to the chief of the Polisario separatists, on the occasion of the TICAD summit held in Tunis, reflects the “improvising” policy conducted by the Tunisian presidency towards Morocco, its strategic interests and its national constants. This unprecedented act of the Tunisian president is “a serious deviation” from the habits and customs in force in diplomatic relations between states and goes against the will of Japan and the vast majority of African countries participating in the 8th Tokyo International Conference on African Development (TICAD 8), the same source added. The presidents of the councils of local authorities and professional chambers described this act as a “betrayal” of the depth of brotherhood and friendship between the two countries, recalling that HM King Mohammed VI stressed in his speech on the occasion of the 69th anniversary of the Revolution of the King and the People that the Sahara issue is the lens through which Morocco looks at the world. The policies of the Tunisian president do not reflect the depth of the brotherly and cultural ties between the Moroccan and Tunisian peoples and are not consistent with the position of positive neutrality that the Tunisian Republic has adopted since the beginning of the artificial conflict over the Moroccan Sahara, the statement underlined.