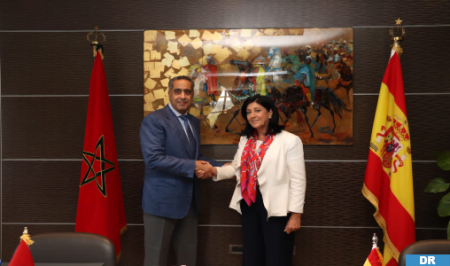 Director General of National Security and Territory Surveillance, Abdellatif Hammouchi, received, Thursday in Rabat, Secretary of State and Head of the National Intelligence Center of Spain, Esperanza Casteleiro Llamazares. This meeting takes place on the sidelines of the working visit of Ms. Casteleiro Llamazares to the Kingdom at the head of a high-level delegation to support and strengthen the Moroccan-Spanish cooperation in various security areas of common interest, a press release from the General Directorate of Territorial Surveillance (DGST) said. On this occasion, Hammouchi reviewed the various models and dimensions of security cooperation between Morocco and Spain, as well as ways to further develop it to match the strategic partnership between the two countries and meet the requirements for availability and efficiency needed to maintain common security in a context of increasing and new security challenges both at national and international levels. This meeting reflects the strength and importance of Moroccan-Spanish cooperation in security and intelligence, especially in light of the challenges associated with the regional context that continue to grow, as well as the risks linked to terrorism, extremism, cybercrime and various forms of cross-border organized crime, including illegal immigration networks, drug trafficking and psychotropic drugs, the DGST concluded.