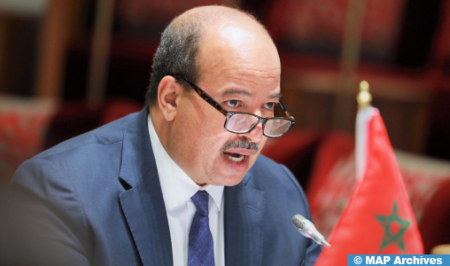 The House of Advisors (Upper House) and the Senate of Burundi are determined to further strengthen inter-parliamentary relations, identify new areas of work and establish a fruitful partnership. In a joint statement issued following a meeting, Tuesday in Bujumbura, between Lower House Speaker, Naama Mayara, and Speaker of the Senate of Burundi, Emmanuel Sinzohagera, on the occasion of the 9th edition of the consultative meeting of the Association of Senates, Shoora and Equivalent Councils in Africa and the Arab World (ASSECAA), the two parties welcomed this meeting which testifies to the importance of political relations between Morocco and Burundi, which are marked by friendship, fraternity, cordiality and mutual will to build solid and multisectoral cooperation. This meeting is part of the new impetus given to bilateral relations between the two legislative institutions, and between the two friendly countries, the statement said. The two Speakers recalled the visit to Morocco of the Speaker of the Senate of Burundi in 2017 which was crowned by the signing of a cooperation protocol between the two parliamentary institutions. The two parties stressed the importance of implementing the 2021-2024 roadmap, signed by the Ministers of Foreign Affairs of Morocco and Burundi to further strengthen bilateral cooperation in several areas, including education and training, technical cooperation, security, economy and investment, international financing and exchange of official visits. Mr. Mayara stressed the strategic importance the Kingdom attaches to strengthening its relations with African countries based on a dynamic, rich and renewed cooperation, within the framework of the strategic vision of His Majesty King Mohammed VI, according to the same source. He also thanked his counterpart for his country’s sustained and unwavering support for the territorial integrity of the Kingdom in regional, continental and international forums. The two Speakers stressed the regional role played by Morocco and Burundi as strong partners in the establishment of peace and stability. They emphasized the important role of the ASSECAA in promoting dialogue and parliamentary consultation between African and Arab countries and in strengthening South-South cooperation.