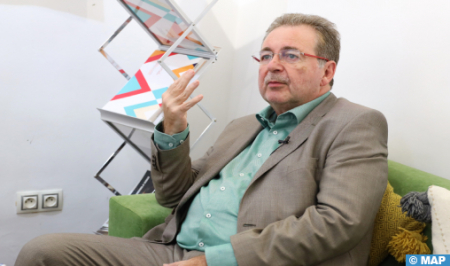 Morocco occupies “a central place” in its regional environment and ” assumes its international responsibilities” in the areas of peace, stability and development, said the Minister-President of the Brussels-Capital Region, Rudi Vervoort. “Morocco occupies a central place in its regional environment and plays a full role with robust institutions guaranteeing the stability it enjoys,” Vervoort in an interview with M24, MAP’s 24-hour news channel, on the sidelines of his visit to the Kingdom. On the diplomatic front, Morocco “has distinguished itself in recent years by an increased openness to Africa,” he observed. On the Kingdom’s efforts to promote peace, stability and development at the regional and international levels, he noted that “Morocco is taking its international responsibilities head on.” Referring to the state of play of the long-standing cooperation between Brussels-Capital and the region of Rabat-Salé-Kenitra, the official said he was pleased with the “positive outcome” of this cooperation. “It is a cooperation that has existed for over 20 years, which has developed in different areas and which affects the major issues of capitals and metropolises,” he stated. “It is also a win-win cooperation because we benefit from the sharing of our experiences,” Vervoort added, noting that the two regions work together “on the territorial issues of today’s regions such as urban development and planning, environment, mobility, health, facilities, schools, and all issues related to the implementation of policies to meet the expectations and needs of the population.” Regarding the new agreements signed this week in Rabat between Brussels-Capital and the region Rabat-Salé-Kenitra, the official noted that the latter aim to “develop an experience and administrative knowledge of the territories to meet the expectations and needs of the inhabitants.” Addressing the common challenges to the regions of Brussels and Rabat, especially in the context of the Covid-19 pandemic, he stressed that “the virus has shown the need for health facilities, infrastructure to care for patients, and more airy living spaces.” “There are also issues of youth training. Cities generally have young populations. The challenge is to reconcile this reality with quality education and vocational training in line with the expectations of employers and the economy,” he added. During Vervoort’s visit to Morocco at the head of a delegation from Brussels, three cooperation agreements were signed between the Council of the region of Rabat-Salé-Kenitra and the Brussels-Capital Region.