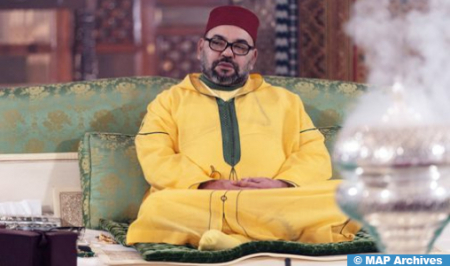 His Majesty King Mohammed VI, Commander of the Faithful, may God assist Him, accompanied by HRH Crown Prince Moulay El Hassan, HRH Prince Moulay Rachid, HRH Prince Moulay Ahmed and HRH Prince Moulay Ismail, chaired a religious ceremony in commemoration of Eid Al-Mawlid Annabawi Asharif, on Saturday evening at the Hassan mosque in Rabat. This religious ceremony was marked by reciting verses of the Holy Quran and panegyrics of the Prophet Sidna Mohammed, Prayer and Blessing on Him. On this occasion, the Minister of Habous and Islamic Affairs, Mr. Ahmed Toufiq, delivered before HM the King a speech in which he presented the balance of the activities of the Higher Council and the Local Councils of Ulema, before handing over to the Sovereign the report relating to these activities. In his speech, the Minister indicated that the Higher Council of Ulema, which has the honor to be chaired by HM the King, Commander of the Faithul, has ensured the accomplishment of its mission in the service of religion and in the respect of the Nation’s constants, noting that this Institution has been able, in spite of the pandemic, to continue its work through the four main axes, namely communication (Tabligh), qualification, supervision and intervention on the ground within the framework of the activities of general interest. Thereafter, HM the King, Commander of the Faithful, awarded the Mohammed VI Prize for Islamic Thought and Studies (Prize of Merit and Tribute) to Mr. Chbihna Hamdati Maa El Aïnine (Rabat). This prize is awarded annually to reward eminent scholars and encourage them to carry out high quality research in the field of Islamic studies, in accordance with the teachings of the noble Shariah which advocates the search for knowledge and urges to make good use of it. HM the King was then greeted by Mr. Hamid Adardour, from the city of Agadir, who received from the hands of the Sovereign the Mohammed VI International Prize for memorization, declamation and exegesis of the Holy Quran. The Sovereign was also greeted by Mr. Farhane Mohamadi Fadlane, from the Republic of Indonesia, to whom HM the King awarded the Mohammed VI International Prize for chanting the Holy Quran with memorization of five Hizbs. HM the King, Amir Al-Mouminine, also awarded the Mohammed VI Prize for excellence in Moroccan calligraphy to Mr. Omar Sarghini, from the city of Rabat. The Sovereign then awarded the Mohammed VI Prize for Moroccan decorative art on paper (Honorary Prize) to Mr. Abdelmajid Talbi, from the city of Salé, and the Mohammed VI Prize for Moroccan decorative art on paper (Prize for excellence) to Ms. Leila El Jemli, from the city of Fez. HM the King also awarded the Mohammed VI Prize for Arabic Literary Art [Al Horoufia] (Honorary Prize) to Mr. Mohamed Boukhana, from the city of Temara, and the Mohammed VI Prize for Arabic Literary Art [Al Horoufia] (Prize for Excellence) to Mr. Mohamed Al Asri, from the city of Casablanca. HM the King was, on the same occasion, greeted by the members of the jury of the Mohammed VI Prize for Islamic thought and studies, Professors Mohamed Kettani, Mohamed Yssef, Mustapha Benhamza, Idriss Khalifa, Ahmed Chaouki Binebine, Ahmed Chahlane and Abdelhamid El Alami. This religious vigil took place in the presence of the Head of Government, the Speakers of the two Houses of Parliament, Advisors to His Majesty the King, members of the government, presidents of constitutional bodies, senior officers of the Royal Armed Forces, members of the Islamic diplomatic corps accredited to Rabat, as well as several ulema and other civil and military personalities. The celebration of this religious ceremony by HM King Mohammed VI, Commander of the Faithful, is in line with the tradition observed by His illustrious ancestors who have constantly taken care to commemorate the anniversary of the coming to the World of the Messenger of Mercy, their ancestor the Prophet Sidna Mohammed, may Peace and Prayer be upon him. An anniversary that marks the blossoming of the lights of guidance for Humanity, thanks to the message carried by the Seal of the Prophets, to spread the high virtues and values of justice and recommend good deeds so that all humans live in peace and understanding.