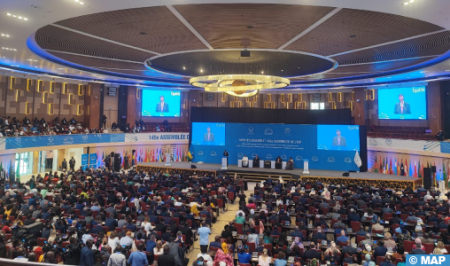 A Moroccan parliamentary delegation takes part in the 145th General Assembly of the Inter-Parliamentary Union (IPU) and the 210th session of its Governing Council, as well as in related meetings hosted by the Rwandan Parliament in Kigali, from 10 to 15 October 2022. The delegation of the parliamentary section to the IPU includes, on the side of the House of Representatives, the chairman of the Authenticity and Modernity Party (PAM) group, Ahmed Touizi, who will chair the delegation, accompanied by Mustapha Raddad, member of National Rally of Independents (RNI) group, Khadouj Slassi, of the socialist group, and on the side of the House of Councillors, Kamal Ait Mik of the RNI group and Hassan Chamis, member of the PAM group, the legislative institution said in a statement. The General Debate will focus on the overall theme of “Gender equality and gender-sensitive parliaments as drivers of change for a more resilient and peaceful world”, in which some 1,000 delegates from 148 parliaments around the world will participate. The event will provide a platform for delegates to deliberate, exchange views and galvanize parliamentary action, with a view to reaching agreements and consensus on legal and public policy frameworks for gender equality, with a particular focus on peace, security, democracy and human rights. The General Assembly will also be an opportunity to address various central issues, including parliamentary actions in the field of migration, the means to fight against human trafficking, human rights violations or the environmental crisis. The Moroccan parliamentary delegation will hold, on the sidelines of the Assembly, meetings with participating delegations, as part of strengthening bilateral and multilateral parliamentary cooperation.