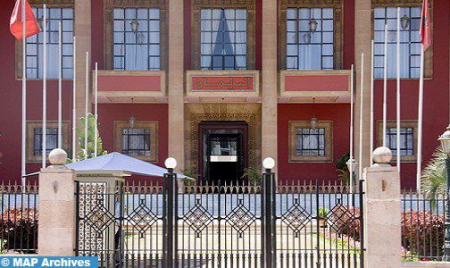 The speech delivered, Friday, by HM King Mohammed VI to the members of Parliament on the occasion of the opening of the first session of the second legislative year of the 11th legislature defines the contours of the water policy and the main guidelines for the promotion of investment in Morocco, said several MPs. The Royal Speech is a renewed call to combine the efforts of all components of the nation to better address the issues, including the two central questions addressed by the Sovereign in His speech, and which are of paramount importance in this current national and international situation, marked by the succession of crises, said these MPs in statements to MAP. In this context, chairman of the Authenticity and Modernity Party (PAM), Ahmed Touizi, said that the royal speech is a roadmap for the Parliament and the Government for the coming years, stressing that HM the King has emphasized the need to implement the water supply plan, through the construction of new dams, desalination of seawater and the use of wastewater. Touizi called for an efficient management of water resources focused on rationalization, noting that Morocco is among the countries that suffer from climate change and the consequences of drought. His Majesty King Mohammed VI also addressed the issue of investment as a key aspect in creating wealth and jobs, he added. Touizi called, in this sense, the Executive to fight the obstacles that hamper investment while strengthening the role of regional investment centers, noting that the framework law forming the investment charter is likely to give a strong impetus to investment. For his part, Noureddine Moudiane, president of the Istiqlali group, said that the royal speech emphasized two important issues related to the problem of water and investment, adding that Morocco “lives in a structural drought”, which requires a special policy in this area. The Sovereign also addressed the question of investment, added Moudiane, recalling the adoption of the framework law forming the Investment Charter by the Commission of Finance and Economic Development in the House of Representatives in accordance with the High Royal Directions. Abderrahim Chahid, chairman of the socialist group, noted that the Royal High Directions contained in the Royal speech have highlighted the importance of collective mobilization and spirit of responsibility to meet the challenges related to the issue of water stress and investment. The Royal speech calls for the intensification of efforts of all stakeholders, he stressed, calling it a strategic speech that comes at an extremely important time, in that it addresses the issue of water, which concerns all Moroccans. Abdellah Bouanou, chairman of the Justice and Development Group, stressed that the latter will make the Royal Speech a roadmap in its legislative work, calling on the various stakeholders, including regional investment centers, to take into account the Royal High Directions.