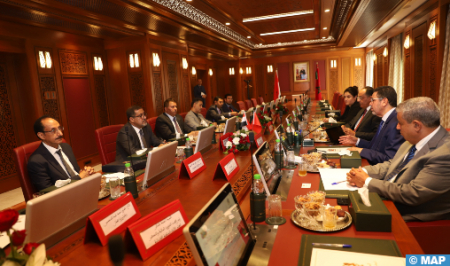 President delegate of the Supreme Council of the Judiciary (CSPJ), Mohamed Abdennabaoui, held talks, Monday in Rabat, with Yemeni Minister of Justice, Badr Abdo Ahmed Alaredh, on a visit to Morocco. During these talks, the two parties discussed ways to strengthen cooperation in areas of common interest and promote the exchange of experiences and expertise to promote the judicial institutions of both countries. In a statement to the press after these talks, Alaredh said that the exchanges have focused on bilateral cooperation in strengthening the capacity of justice and various associated bodies, namely notaries. These talks are in line with the memorandum of understanding, signed with Minister of Justice, Abdellatif Ouahbi, and aimed at stimulating the exchange of experiences in the judicial field between Morocco and Yemen, said the Yemeni official. This meeting was also an opportunity to further discuss the modalities of hosting the graduates of the Yemeni Higher Institute to continue their doctoral studies at the Higher Institute of the Judiciary in Morocco (ISM), he said. This visit, marked in particular by the presence of the Yemeni ambassador in Rabat, is part of the participation of the Yemeni government official in the 38th session of the Council of Arab Justice Ministers, held on October 20 in Ifrane.