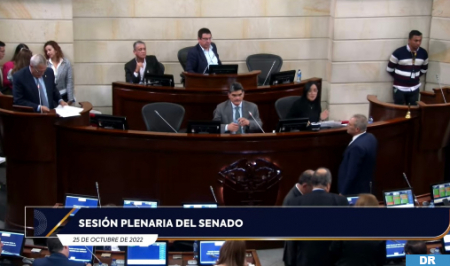 Colombian senators from different political parties slammed Tuesday the decision of president Gustavo Petro to recognize the pseudo “sadr”, on the occasion of the presentation of a motion signed by an overwhelming majority that believes that the position of this leftist president “goes against the fundamental principles of Colombian diplomacy”. Speaking after the reading of this motion, given by the Secretary General of the Senate, Gregorio Eljach Pacheco, senator Germán Blanco Alvarez, member of the Conservative Party (in power) and ex-president of the House of Representatives, blasted the decision of president Gustavo Petro (left) which harms diplomatic and economic relations with Morocco. The senator recalled, during this plenary session, the various agreements signed between Morocco and Colombia, including that of exemption of visas, as well as the progress achieved in bilateral relations whose viability is threatened today because of Colombian interference in the internal affairs of the Kingdom. For Germán Blanco, “the Colombian State has no business interfering in the affairs of other States. This entity (polisario) installed in the desert is nothing more than a separatist movement”. Neither the Arab countries nor the UN recognize this entity, sponsored by Algeria, stressed the Colombian senator, who describes the polisario as “separatist and terrorist movement”, denouncing the fact that Colombia joins a handful of countries like Algeria that recognize the pseudo “sadr”. The Colombian president should know that “the geopolitical map of the world is absolutely different today (…) there is no longer a Berlin Wall and there is no longer a Soviet Union. The political context of the world was completely different at the time,” he stressed. “Petro manifested his positions on social networks since 2010 before he was president, there is nothing wrong with that, but he who is president today, should act as such,” recommended the Colombian senator. “Today, we cannot afford in a democratic country like ours, to recognize a separatist group as if it were a country, to harm relations with Morocco,” he added, calling on the Foreign Minister to reconsider this position. The senator also blasted senator Gloria Florez Schneider (Colombia Humana party), president of the Second Permanent Constitutional Commission, who was one of the main instigators of the president’s decision. For his part, Jose Luis Perez Oyuela, of the Radical Change party (right), said that Morocco enjoys a great tradition of good relations with Colombia of more than 40 years, with cultural, academic exchanges and bilateral cooperation. For him, Colombia should support the autonomy project for the Sahara. “We call on the Ministry of Foreign Affairs to be cautious about the historical and stable relations (with Morocco), in the face of this decision to recognize the polisario”. Senator Paola Holguin Moreno (Democratic Center) expressed the support of her parliamentary group to the motion signed by an overwhelming majority of 62 senators out of a total of 108, recalling that the polisario front has no official status at the UN. “We are concerned about the recognition of an armed group and its representatives who have no representation in the UN (…) Since 1969, Colombia and Morocco have had uninterrupted diplomatic relations and last year four agreements were signed on visa exemption, the fight against drug trafficking, air transport and with the Moroccan Agency for International Cooperation”. Morocco, she added, presented in 2007 an initiative for a solution to the Sahara dispute. “We know that diplomatic relations are constitutionally the responsibility of the Executive, but we know that we, as PMs, have an obligation with regard to such a sensitive issue. It is a right to sovereignty and a matter dealt with by the UN,” said the senator. Tuesday evening, the Colombian Senate expressed through a motion its “categorical rejection” and “its total disagreement” with the decision of the president to restore diplomatic relations with the puppet entity of the “sadr”, which “goes against the fundamental principles of Colombian diplomacy”.