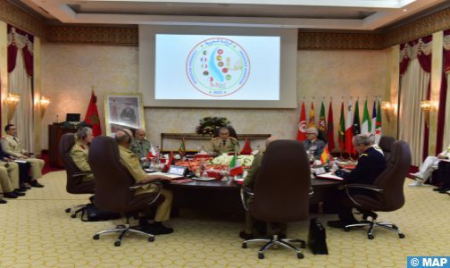 Upon High Instructions from HM the King, Supreme Commander and Chief of General Staff of the Royal Armed Forces (FAR), the 14th meeting of the chiefs of staff of the armies of the member countries of the 5+5 Defense Initiative, under the chairmanship of the Kingdom of Morocco, was held on Thursday in Rabat, with the participation of the chiefs of staff of the armies of eight member countries of the Initiative, namely France, Italy, Libya, Malta, Mauritania, Morocco, Portugal and Spain. On this occasion, the General of the Army Corps, Inspector General of the FAR and Commander of the Southern Zone, in his opening speech, saluted the efforts of all member countries to make this Initiative a privileged space for sharing experiences and reflections in the field of security and defense, promoting synergies between the armies of the two shores of the Mediterranean Sea. He also reaffirmed the FAR’s attachment to multilateral military cooperation to face the multiple challenges facing the region, says a statement released by the General Staff of the Royal Armed Forces. In turn, the Chiefs of Staff of the armed forces of the participating countries stressed the importance of the Initiative in terms of the exchange of good practices among the armed forces of the member countries of the Initiative, but also in terms of strengthening mutual understanding and trust. During this meeting, the progress report of the 2022 action plan was presented before opening the discussion on the main activities to be included in the 2023 action plan. In this framework, the Chiefs of Staff of the armies of the eight countries participating in this 14th meeting of the “5+5 Defense Initiative” approved the 2023 action plan and issued recommendations and conclusions that will be included in the joint declaration that will close the 18th meeting of the Ministers of Defense of the member countries, scheduled for December 16, 2022 in Rabat. These recommendations mainly concern the promotion of the sustainability of the Initiative, the promotion of equal opportunities between sexes and the continuation of multilateral cooperation, in particular in the fields of maritime security, air safety, the contribution of the armed forces to the management of major disasters, as well as academic research and training. The Chiefs of Staff of the participating armies also pledged to further strengthen their cooperation to promote security and stability in the region and to address common challenges in this vital area, especially the fight against illicit trafficking, irregular migration, terrorism and marine pollution. They also welcomed the conduct of practical exercises and the efforts deployed in the framework of the Initiative’s projects and structures, in particular the “5+5 Defense” College, the Euro-Maghreb Center for Research and Strategic Studies, the “5+5 Defense” Forum and the 5+5 Center for humanitarian demining training, the statement concluded.