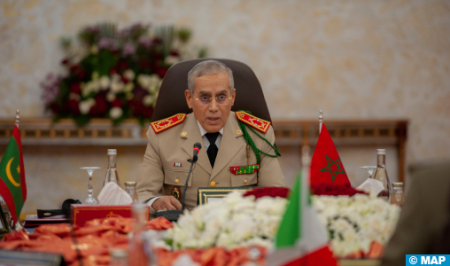 The Royal Armed Forces (FAR) remain committed to participating in promoting the 5+5 Initiative cooperation spirit and supporting the projects proposed in its action plans, said Lieutenant General Belkhir El Farouk, Inspector General of the FAR and Commander of the South Zone, on Thursday. In an address on the occasion of the opening of the 14th Meeting of Chiefs of Staff of the Armed Forces of the member countries of the 5+5 Defense Initiative, the Lieutenant General said that the FAR, convinced of the need for this collective momentum, are committed to consolidate its relevance as an instrument of multilateral cooperation and consolidate its operating mechanisms. Upon the High Instructions of His Majesty the King, Supreme Leader and Chief of General Staff of the Royal Armed Forces (RAF), the 14th meeting of the Chiefs of Staff of the Armed Forces of the member countries of the Initiative “5 + 5 Defense” was held under the chairmanship of the Kingdom of Morocco with the participation of the Chiefs of Staff of the Armed Forces of eight member countries of the Initiative, namely France, Italy, Libya, Malta, Mauritania, Morocco, Portugal and Spain. While reaffirming the strong commitment of Morocco to the spirit and founding principles of this Initiative, Lieutenant General Belkhir El Farouk expressed the sincere commitment of the Kingdom to contribute to peace and security efforts in the Western Mediterranean, noting that in an international context in perpetual change, characterized by the resurgence of crises, this initiative is called to face multiple challenges that weigh on the region. These challenges are related to terrorism, illegal immigration, cybercrime, trafficking of all kinds, pandemics and instability in the Sahel, he said, adding that they are further amplified by the impact of climate change and extra-regional conflicts. “This calls for synergy of efforts to sustain the 5+5 Defense Initiative, through the consolidation of cooperation and the federation of efforts to achieve the desired objectives,” he stressed. The Inspector General of the FAR also noted that thanks to the determination of all its member countries, the 5+5 Defense Initiative has evolved gradually and asserted itself more and more as a forum for cooperation to strengthen mutual understanding, through the promotion of practical activities in areas of common interest. In this regard, he said that within the framework of this year’s activities, the Moroccan Presidency welcomed the efforts of all member countries for the successful completion of activities under the 2022 Action Plan as well as for their contributions to the draft 2023 Action Plan. These activities relate mainly to the conduct of various exercises scheduled, the execution of training and research work carried out by the college “5+5 Defense” and the Euro-Maghreb Center for Research and Strategic Studies and the implementation of projects of the Initiative, such as the Forum “Cyber 5+5” and the 5+5 Training Center on humanitarian demining. Speaking at the close of the meeting, Lieutenant General Belkhir El Farouk welcomed the fruitful discussions that marked this event, indicating that this meeting was an opportunity to promote dialogue on issues of common interest, in a spirit of respect, mutual trust and shared responsibility. The recommendations made at this meeting will be submitted to the meeting of Ministers of Defense, which will take place in Rabat on December 16, 2022, said the Inspector General of the FAR who took this opportunity to wish full success to the Portuguese Republic, which will hold the presidency of the Initiative for the year 2023. Created in 2004, the “5+5 Defense Initiative” is a forum for consultation and multilateral understanding between the two shores of the Western Mediterranean. Bringing together five states from the southern shore of the Mediterranean (Algeria, Libya, Mauritania, Morocco and Tunisia) and five states from the northern shore (France, Italy, Malta, Portugal and Spain), this forum provides a preferential framework for mutual knowledge and exchanges on common security issues in the 5+5 area. Its presidency rotates. Cooperation within the Initiative is based on three principles: consensus, voluntarism and pragmatism.