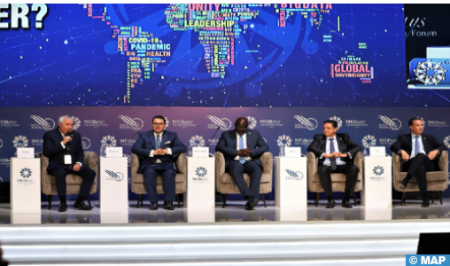 The 14th edition of the MEDays Forum (November 2-5) kicked off, Wednesday in Tangier, under the theme, “From crisis to crisis: towards a new world order?”, with the participation of president of the Republic of Liberia, Dr. George Weah, as guest of honor. Placed under the High Patronage of HM King Mohammed VI, this edition will be an opportunity to discuss the main geopolitical, economic and social issues that agitate the planet: war in Ukraine, conflicts and instability in Africa, tensions in the Indo-Pacific, food and energy crises, inflation, climate change…. After two years of absence, due to health constraints, the MEDays Forum once again welcomes a community of 230 distinguished officials from 80 countries, as well as experts and attentive and curious observers of international relations, bringing the number of expected participants to 5,000. Speaking on this occasion, president of the Amadeus Institute and founder of the MEDays Forum, Brahim Fassi Fihri, stressed that “MEDays is above all a forum of the South. A forum for Africans and by Africans”. “It is through this prism that we should look at the world ahead,” he said, recalling that since the last edition of the forum, two years ago, “a health crisis coupled with an economic shock has shaken the world’s economies,” while the war in Ukraine “severely paralyzes multilateral institutions of peace and security and disrupts global trade in raw materials”. In this regard, said Fassi Fihri, African countries more than any other need to have guarantees from the international community. “We are the frontline countries on the issue of climate and we should put this issue at the center of the next COP, to be held in Sharm el Sheikh,” he stressed. He added that African countries, as well as Morocco, guided by the Vision of HM King Mohammed VI, have chosen to act responsibly, to reach out among brothers of the African continent in to build a stronger African Union. For his part, chairman of the Moroccan Employers’ Association (CGEM), Chakib Alj, said that “cooperation between African countries is essential. It is even more so today in the global economic context that we are going through”. “It goes without saying that if there is a way to speed up the emergence of the African continent, it is investment and co-investment. And investment means first of all a favorable business climate, especially in a global context marked by uncertainty,” said Alj. President of the Council of the Tangier-Tetouan-Al Hoceima Region, Omar Moro, noted that “the choice of the theme of this MEDays edition, which has a tradition of examining the major issues facing decision-makers in the countries of the South, reflects a deep awareness of the acuteness and size of current shocks and the weight of responsibility that falls to us all”.