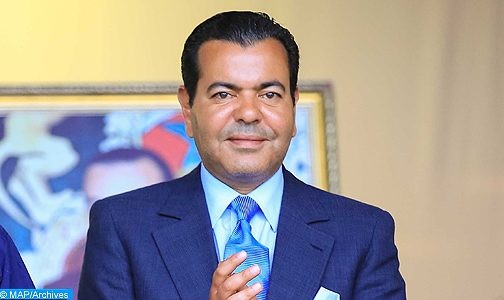 His Royal Highness Prince Moulay Rachid represents His Majesty King Mohammed VI at the proceedings of the Heads of State and Government segment of the 27th Conference of the Parties to the United Nations Framework Convention on Climate Change (COP 27), which kicked off on Monday in the seaside resort of Sharm el-Sheikh, Egypt. Upon his arrival at the International Conference Center, HRH Prince Moulay Rachid was welcomed by Egyptian president Abdel Fattah Al-Sissi and UN Secretary General António Guterres. After posing for a souvenir photo with the leaders and Heads of State, HRH Prince Moulay Rachid joined the conference room. Some 110 leaders and heads of state and government will make national statements on how they are addressing climate change issues and their countries’ plans to increase their emission reduction commitments. The Summit provides an opportunity to discuss ways to mobilize financial resources and investments to address climate change, reduce emissions, adapt to its impacts and build resilience.

The contribution of rich countries to climate action financing is among the priorities of COP 27. This includes the achievement of the pledge of $100 billion each year from adaptation financing from developed to low-income countries. The examination of the effects of climate change in Africa, the establishment of visions to face these challenges through science and financing are also among the themes of this Conference.