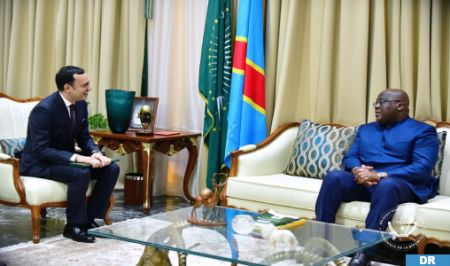 The President of the Democratic Republic of Congo, Félix-Antoine Tshisekedi Tshilombo, received in audience, Friday in Kinshasa, the Minister of Economic Inclusion, Small Business, Employment and Skills, Younes Sekkouri, bearing a message from His Majesty King Mohammed VI, said the DRC Presidency. This audience, held in the presence of the ambassador of HM the King in Kinshasa, Rachid Agassim, was an opportunity for the Moroccan minister to emphasize that “the Kingdom maintains excellent relations with the DRC thanks in particular to the friendship linking the leaders of the two states,” added the DRC Presidency on its official twitter account. Regarding the security situation in the eastern part of the DRC, Sekkouri said that HM the King “is firmly committed to the principles of sovereignty and integrity” for which the Sovereign “is uncompromising”, the Presidency said. According to the Congolese news agency ACP, which cites a source from the DRC presidency, the talks between the Congolese Head of State and Sekkouri were an opportunity “to review the excellent relations between the two countries, on the one hand, and, on the other, between HM King Mohammed VI and President Felix-Antoine Tshisekedi.” The diplomatic and historical relations between the Democratic Republic of Congo and the Kingdom of Morocco have “always been in good standing,” noted the same source. The Moroccan minister had been received, Thursday in audience in Libreville, by the Gabonese President, Ali Bongo Ondimba, to whom he delivered a message from His Majesty the King.