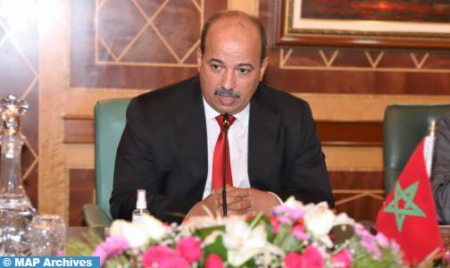 Speaker of the House of Councillors, Naama Mayara, met on Thursday in Rabat with a delegation of the Technical Committee of the African Union, led by the Chairman of the AU Administrative Tribunal, Sylvester Salufu Mainga, currently visiting Morocco. During these talks, Mayara discussed “the great achievements made by our country in the judicial field, after the adoption of the 2011 Constitution which considers the judiciary as an independent and autonomous authority, thus enshrining the principle of separation of powers,” the Upper House said in a statement. The Speaker of the House of Councillors emphasized the constitutional and legal guarantees that the Moroccan constitutional legislator has granted to the judicial authority so that it can perform its noble duties with all the integrity and impartiality required, the same source added. According to the statement, Mayara also discussed “the sincere return of the Kingdom to the African Union in order to strengthen joint African action for economic and social development, as well as the realization of the aspirations of African peoples to prosperity, security and stability.” “Under the High orientations of His Majesty King Mohammed VI, Morocco is making every effort to strengthen the dynamism of all bodies and institutions of the African Union,” he said, recalling also the central role played by the Moroccan Parliament within the Pan-African Parliament (PAP) in order to consolidate its position and operationalize its main functions as a representative institution of the African peoples looking after their best interests. For his part, Salufu Mainga said that the visit of the AU Technical Committee delegation to Morocco is part of the ongoing consultations and discussions between the African parties to revise the Basic Law governing the action of the AU Administrative Tribunal, which dates from 1966, noting that the content and provisions of this text no longer keep pace with developments in joint African institutional action. He also reported that the AU Technical Committee is in the process of finalizing a proposal for draft amendments that will soon be submitted to the relevant African authority for approval.