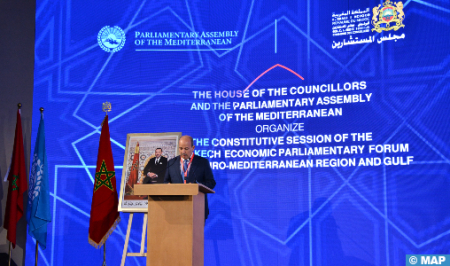 The first edition (constitutive session) of the Economic Parliamentary Forum for the Euro-Mediterranean Region and Gulf, initiated by Morocco’s House of Councillors and the Parliamentary Assembly of the Mediterranean (PAM), kicked off Wednesday in Marrakech. The opening ceremony was marked by the presence of the Minister Delegate for Relations with Parliament, Government Spokesman, Mustapha Baitas, the Speaker of the House of Councillors, Enaam Mayara, also President of the Association of Senates, Shoora and Equivalent Councils in Africa and the Arab World, the President of the PAM, Pedro Roque and the President of the Pan-African Parliament, Fortune Zenaphia Charumbira. This high-level meeting, attended by parliamentarians from more than 30 countries as well as government officials, public and private sector actors, academics, experts, businessmen and representatives of civil society, is an opportunity to strengthen cooperation between the two geographical areas and to intensify efforts to address together common challenges, leading to economic growth and the preservation of peace and security in the region. The Forum, hosted by the House of Councillors, an active member of the PAM, is thus a key interface for parliamentary diplomacy and a crucial stage in the debate on the most pressing economic and environmental issues in the Euro-Mediterranean Region and Gulf. Several thematic sessions are on the agenda, through which the organizers aspire to achieve a paradigm shift in addressing the major social and economic challenges of climate change and to promote more effective economic integration in the region, enabling it to withstand exogenous factors, in addition to the creation of an expanded South-South trade network and the establishment of an integrated self-sufficient green energy production and marketing area. Driven by this vision, the Forum represents a platform for discussion and assessment of the economic situation in the region, in light of the unprecedented challenges facing the region, from the great financial recession to the Covid-19 pandemic, and the Russian-Ukrainian crisis which has had a significant impact on all productive sectors and consumers worldwide, including in the Euro-Mediterranean and Gulf region. In this regard, participants will review the urgent measures needed to address the economic effects of this crisis and examine its multifaceted economic repercussions in the long term, focusing on issues such as food security, energy security, climate change, environmental issues, industry 4.0, financial and trade integration, regional disparities, sustainable tourism and maritime transport. The Forum also aims to foster the emergence of a more integrated economic and financial zone, while ensuring the implementation of more sustainable practices and a transition to green energy capable of reducing the effects of climate change and increasing the energy independence of the region, to propose tangible solutions to improve resilience to challenges and crises (food, fuel, fertilizer …) and to better prepare the countries of the region to cope with possible future shocks, including financial and epidemic crises, while reducing dependence on external factors. Participants will thus work over the two days to propose practical solutions to the main economic and environmental challenges facing the region, by engaging in discussions on concrete legislative proposals to enhance energy security in the region and support economic complementarity in the Euro-Mediterranean and Gulf space in terms of renewable energy, as part of the resumption of political negotiations at the parliamentary level to establish a common trade and economic area, while reconnecting regional priorities with the broader objective of mitigating climate change and promoting the United Nations 2030 Agenda and the objectives of the Paris Agreement. Morocco’s hosting of this meeting, through the House of Councillors, is a testimony to the confidence enjoyed by the Kingdom as a major player in the Mediterranean region and a credible partner that contributes greatly to the success of efforts to address the challenges facing the region.